Twenty years ago, Lena McGinley brought her love of Irish dance to the Harrisburg area when she started teaching six students. Since that time, what originally began as a small performance troupe known as the Ceili dancers, has grown into a full-fledge elite Irish Dance School.

Lena was born in Ireland and lived in Carrick-On-Shannon until the age of five. Her family moved to the United States in 1982, and she began dancing when she was 7 years old under the direction of Donny Golden in Mineola, New York. She performed and competed with the Golden School of Irish Dancing until the age of sixteen. At the age of fifteen, along with sisters, Annie and Danielle, and 100 other champion dancers, Lena performed at Radio City Music Hall with Frank Patterson in “A Great Night for the Irish.” When she left for Pennsylvania, she was competing at the Preliminary Championship level in An Coimisiún le Rincí Gaelacha. But after arriving in Hershey, she hung up her Irish dancing shoes for a period of time.

Like Lena, Danielle, the middle McGinley sister, was born in Ireland and has been active in Irish dancing since she was five years old. In January 2000, Danielle was one of Lena’s original Ceili dancers, and has since contributed to the school through her artwork and love of costume design.

“Danielle designed the logo for the school,” says Lena. “She lives and works in California but she’s still a part of the school.”

While Lena and Danielle were born in Ireland, Annie, the youngest of the three McGinley girls, was born in Mineola, New York. Like her sisters, she danced under the direction of Donnie Golden. Annie also trained under Maureen O’Grady in Bethlehem, Pennsylvania. She has performed at Radio City Music Hall and Carnegie Hall and competed through Preliminary Championship Level in An Coimisiún le Rincí Gaelacha.

“I’ve been competing all my life,” says Lena, a former math teacher in the West Shore School District. “I’ve always loved teaching, and bringing the joy of Irish dance to others was a natural extension of my training as a public school educator.” The McGinley School of Irish Dance founder also holds a Bachelors Degree in Secondary Education from Bloomsburg University and a Masters Degree in Educational Administration from Temple University. Both Lena and Annie are fully qualified teachers, ODCRN, with Cumann Rince Náisiúnta, (CRN), Dublin, Ireland. Lena is also a qualified adjudicator.

Irish dancing is, as the name would suggest, a group of traditional dance forms originating in Ireland, known for its rapid leg and foot movements, while the body and arms are kept largely stationary. Irish step dancers perform with a rigid torso while much of the movement comes from the legs with quick steps and kicks.

Lena says as her original dancers progressed and the school grew, she found other ways to challenge her students. In August 2004, the school became a CRN sanctioned school, and as a CRN member, Lena’s students could participate in Feiseanna or Irish dancing competitions.

“As a CRN member, my students would be able to compete at the local, national and world level competitions in both solo and teams,” Lena says. “And they’ve been very successful in their competitive efforts.” 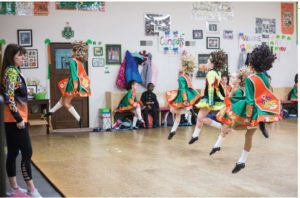 The weeks before a competition are filled with extra practices as the dancers fine-tune their steps. Lena says judges will be looking at timing, foot placement, upper body control, and the grace and energy of the overall performance.

Dancers are also checking to make sure that their sparkly dance costumes and wigs are in good shape. Many girls wear wigs instead of curling their hair like Irish competitors of the past. And dancers are polishing the two pairs of shoes needed for different dances. Soft leather shoes, or ghillies (GIL-lees), help with the light, quick movements of the reel. With hard shoes, feet can “drum” to the beat of hornpipes and heavy jigs, an integral part of the traditional Irish music.

Laura Sterling of Mechanicsburg brought her daughter Claire, age 9, to the school for a recent Thursday evening dance practice in preparation for an upcoming Irish dance competition. This would be the last practice before Claire and the rest of the group left for the North American Open Irish Dance Championships held in Nashville, Tennessee, and they jumped, stepped and hopped across the floor as the McGinley sisters watched with eagle eyes.

Keep your foot pointed,” says Lena to one student. “Keep those arms straight,” says Annie to another. “Watch your posture!” says Lena to a group of three. The McGinley sisters run their school on the core values of discipline, hard work, and dedication, and it is obvious as they lead their students through the routines which they will compete during the three-day competition.

“We pride ourselves on making sure our students always strive for excellence, whether it is through practice, performance, or competition,” says Lena. As her students prepare to leave for the big competition, she says even champions feel the dancing of butterflies in their stomachs. Lena and Annie can feel the nervous tension that some of their students display and gently remind them that it’s a natural feeling. “Just relax,” Lena says. “Concentrate.”

Although competition is an important part of any young dancer’s life at McGinley School of Irish Dance, fun, joy, and friendship are just some of the additional values that are promoted at the school.

“The importance of family is central to the success of the school. At McGinley, students, parents, and staff support and encourage each other,” says Lena. “We are a large dance family.”

At age 4, Irish dancing became Claire Sterling’s passion. After watching an episode of “Sesame Street” that featured Irish dancers, Claire proclaimed to her Mother, Laura Sterling: “I want to do that.” Claire’s parents immediately enrolled her in the McGinley School of Irish Dance.

“McGinley School of Irish Dance has provided our daughter with great life lessons on work ethic, tenacity, fun and friendship and the challenges they all bring,” says Sterling. “The positive impact of McGinley School of Irish Dance on our daughter Claire has transcended off the dance floor, and we are grateful we look the leap into the world of Irish dance.”

Sterling’s husband Rob has also made the leap into the world of Irish dance, joining the school’s adult class which meets once a week. “I started to Irish dance at the ripe old age of 45, initially so I could dance with my daughter in a parent/child dance competition,” he says. “I was surprised at how challenging it was, even for someone like myself who does Crossfit and Martial Arts.”

Claire says she enjoys Irish dancing at McGinley because of the friends she has made and her teachers. “I like dancing at McGinley School of Irish Dance because I’ve made very good friends, and I’ve learned how to perform in front of a large group and not be nervous,” she says. “My dance teachers have taught me to work hard and it helps me in everything I do. My best friends are at my Irish Dance School.”

Her friend and dance school colleague, Rhory Bendick, age 9 years, has been dancing for five years. Like Claire, she likes to be with her friends and learn new dances. “I like the competitions because it’s fun to wear our dresses and be on stage.”

With St. Patrick’s Day looming, the school is polishing its collective shoes for one of its busiest times of the year, performing in both the York and Harrisburg St. Patrick’s Day Parades. “We’ll also dance at the Friendly Sons of St. Patrick’s annual party,” says Lena.

Through the efforts of Lena McGinley, Irish dance, with its intricate kicks, twirls and beautiful costumes, maintains its popularity through the McGinley School of Irish Dance. “I can’t believe I’ve been teaching Irish dance for 20 years,” says Lena. “It’s been a journey, but I’ve loved every minute of it. I do it for my students. I love being a part of their lives.”

McGinley School of Irish Dance is located at 701 Pear Street, Lemoyne, PA. For more information call 717-439-2991 or go to www.mcginleyirishdancers.com.