Servant Stage Company – a nonprofit, Lancaster-based, theater group proves it doesn’t take a massive budget to bring quality entertainment to the community.
Founder and Executive Director Johnathan Bauer arrived in Lancaster at 9 years old to work at the esteemed Sight & Sound Theatre. The seeds for a nonprofit theater had already been sowed in him, but Bauer was searching for the right field in which to plant them.

“Very early in my theater career, I was struck by how self-centered this industry can be at times. I wondered what a theater organization would look like where everyone involved was focused on serving others,” explains Bauer.
In 2011, he and his wife launched Servant Stage Company to serve the community with “outstanding musical and theatrical experiences” while offering those experiences to everyone despite financial or physical barriers.
Servant Stage offers more than 100 shows each year at venues such as schools, parks, churches and retirement homes. There are no ticket prices, and guests are encouraged to pay what they will.
“Our focus and commitment is to serve our community and our audiences, as well as our staff and volunteers,” notes Bauer. “So often in the arts, the focus is on the artists – their skills, creativity or success. Servant Stage flips this on its head, making our audiences the primary focus.”

Make no mistake, volunteer theater does not mean amateur.

The 2017 schedule includes Little Women, The Civil War, Bye Bye Birdie and Around the World in 80 Days. Prickett explains that most of the performers are professional actors seen on other local stages.
“When Servant Stage first started out, it truly was a labor of love in that many theater professionals from across the region generously donated their time and talent to being involved in our productions,” says Prickett.
But why theater? Of the many ways to reach out to lift up others, why do it with performances?

“We are so overly saturated with instantaneous media – Netflix, Hulu, YouTube, you name it. People mindlessly scroll through their Facebook feed 24/7, tweet 140 characters and post selfies on Instagram,” says Prickett. “There’s little real connection face to face. It gives me great joy to connect with our audiences – whether that be someone at a retirement home who hasn’t been able to see or hear a musical production in many years because of a physical limitation; a child at a school who is seeing a theatrical production for the first time; or a family of six who otherwise would have never been able to afford attending a show because of the cost.”

Bauer agrees, “The arts have the power to bring people together and inspire, educate, challenge and brighten the spirit. There are many theaters doing great work across the region, but even at other nonprofit theaters, tickets can cost $50 or more, making theater completely inaccessible to most people, enforcing the idea that the arts are a luxury for the wealthy.”

Now six years into operation, the seeds that Bauer and his wife planted have blossomed in ways that surpassed his expectations. In three years’ time, audience attendance grew from 5,000 to 20,000 with annual audition attendance rising from 50 to 200 performers.
“It’s been a fun and exciting ride so far,” says Bauer. 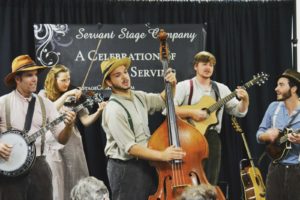