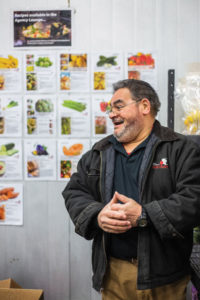 Each month, the Central Pennsylvania Food Bank serves 140,000 neighbors in need through locations in Harrisburg and Williamsport. Last year, the organization provided more than 46 million meals by working with more than 1,000 partner agencies and programs, primarily in the Susquehanna Valley in Pennsylvania. Together, this charitable food network distributed nearly 10.2 million pounds of produce and 2.2 million servings of fresh milk to families and individuals facing food insecurity.

“Through partnerships with retailers and producers throughout the region, and hundreds of distribution sites across the Susquehanna Valley in Pennsylvania, the Central Pennsylvania Food Bank has developed a robust system of food rescue and redistribution,” explained Joe Arthur, the food bank’s executive director.

“Last year, the Central Pennsylvania Food Bank rescued 12 million pounds of retail food,” he noted. Looking ahead, he added, “and we expect to rescue more than 14 million pounds in the year to come.”

The food bank network has streamlined many of these transactions by matching regional human service providers directly with convenience stores and other retail locations. Current donors include nearly 400 retail store locations, from national chains like Wal-Mart and Sam’s Club, to home-grown businesses like Giant Foods, Weis Markets, Rutters, and Karns. Even Save-A-Lot, Sheetz, and Starbucks stores open their doors to staff and volunteers from 200 agencies served by the food bank.

Arthur noted that this work is only possible because of its model supply chain and devoted Central Pennsylvania Food Bank volunteers, who donated 32,000 hours last year to deliver on the organization’s commitment that “no one should be hungry.” 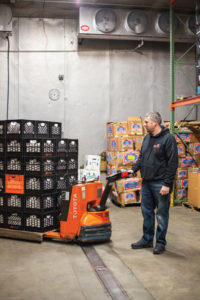 The PASS program covers the costs associated with harvesting, processing, packaging, and transporting surplus agricultural products from the field to the charitable food system. Products may include fruits, vegetables, eggs, poultry, pork, beef, and grains. PASS funding also covers the cost of processing nutritious surplus milk into cheese or other value-added products.

The PASS program is funded by a $1 million appropriation in the state budget,” Arthur explained. “PASS provides an innovative mechanism to channel healthy and nutritious surplus food from regional farms to meet the needs of hungry Pennsylvanians. We are grateful for this support and hope that elected officials will increase the PASS program appropriation to $3 million for the 2020 budget to help us meet the unprecedented levels of need.”

Farmers throughout the region praise the program that aggregate the fruits of their hard work to benefit Pennsylvanians in need.

“We now have a mechanism for our farm to recover a portion of the fixed costs associated with packaging and distribution of our donated potatoes,” explained Dave Masser, president of Sterman Masser, Inc., based in Schuylkill County.

Like produce and other perishable items, milk is one of the most frequently requested items at food banks.

“Unfortunately, milk is rarely donated to food banks, so hungry families in Pennsylvania communities are missing out on the essential nutrients that milk provides,” explained Jane Clements-Smith, Feeding Pennsylvania’s executive director. At the 2015 Pennsylvania Farm Show, Feeding Pennsylvania joined with the American Dairy Association North East and the Pennsylvania Dairymen’s Association to launch Fill a Glass with HopeR. As the nation’s first-ever statewide charitable milk program, the Fill a Glass with Hope campaign seeks to raise awareness and connect food banks with local milk suppliers.“Since 2015, Fill a Glass with Hope has helped to distribute over 11 million servings of fresh milk. Through a variety of grants, corporate sponsors, industry partners, and individual donations, food banks can purchase milk directly from processors, which is distributed to local food pantries for families in need.”

In addition to the PASS program, the Central Pennsylvania Food Bank purchases food from the Mid-Atlantic Regional Cooperative, or MARC. This is a regional produce distribution system for 23 Feeding America food banks from Virginia to New England. The cooperative can handle large quantities of produce, approximately 1.5 million pounds of produce per month, which would be impossible for any single food bank to handle. With MARC’s ability to negotiate long-term deals and volume commitments, food producers and consumers alike benefit from the partnership.

“The MARC is a great tool for farmers and importers to use because we speak produce. We know the language and make it as easy as possible for them,” explained MARC Director James DeMarsh. “We work efficiently to handle any load that is delivered, and redistribute the produce to member food banks. Using the MARC is also attractive in terms of potential tax deductions and payment for product.”

“Food banks are shifting to more fresh and nutritious foods and want to distribute more produce. We help them by coordinating procurement and logistics,” DeMarsh added. Before joining the cooperative, DeMarsh spent more than 10 years working on vegetable farms in Massachusetts, selling produce wholesale, and buying produce in the Philadelphia area. 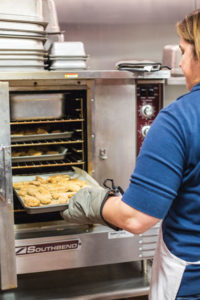 “Without our retail partners, New Hope could not achieve our mission of ‘sharing Christ’s love by meeting human need,’ which includes feeding our guests who are hungry. New Hope Ministries ,” noted Eric Saunders, executive director of New Hope Ministries. “I can’t stress the importance of the partnership between New Hope Ministries and the Central Pennsylvania Food Bank.  They are a wealth of knowledge and resources to help charitable food providers throughout the region in their missions to feed their neighbors in need.

“During the past year, we have picked up and delivered more than 1.3 million pounds of high-quality food donated by area stores and restaurants. Their generosity allows us to stock our centers in Dillsburg, Dover, Hanover, Mechanicsburg, New Oxford, and Lemoyne, as well as our mobile food pantry,” Saunders continued. “Fresh fruits and vegetables can seem like a luxury when you are in crisis. The shelf life of a ripe banana may be limited to one day, but these merchants made it possible for us to provide love, hope, and food to more than 9,000 families during the past year. Our hope for this year is to rescue and share five to six million pounds of fresh, healthy produce.”

One in nine Central Pennsylvanians, including one in six children, struggles with food insecurity. Many first-time volunteers at the food bank are surprised to learn that the food they sort and pack fills 480,000 backpacks to youth in 25 counties, which is especially important on weekends and summer breaks. The Central Pennsylvania Food Bank provides 74,000 senior citizens with food boxes through its ElderShare program. Another 20,000 Pennsylvania families are served via the Military Share initiative.

While inadequate access to food may be a multi-generational challenge, some food bank recipients learn about the food bank model due to a short-term emergency. Earlier this year, regional food banks ramped up operations to feed 900 federal workers during the country’s longest federal shutdown, which lasted more than a month. Food bank staff reported that some of these furloughed employees and their families – many of whom had never experienced food insecurity – were “humbled and amazed” by the quality of food they received.

Food donations come from producers of all ages. Student farmers in the Steelton-Highspire School District donate a variety of produce raised in the high school’s aquaponics laboratory. The water-grown plants are very productive, and the young farmers are excited to join with providers, large and small, to share the fruit of their labors with neighbors in need.