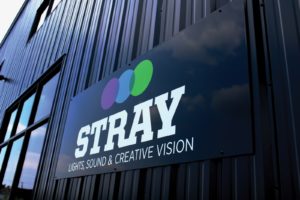 If you attended last year’s Simply the Best gala and felt a little bit like a rock star, you have Stray Production Services to partially thank for it. Although you probably didn’t see any of the crew or the work it took to hang and design the lighting effects, Stray was responsible for illuminating the party and creating that concert-like atmosphere. Stray was back again for this year’s party and we went behind-the-scenes with owners Chris and Melody Strayer, at their Lititz warehouse to find out more about how they make their magic.

“As we get farther into the event production industry, we’re very much realizing it really does take a small army of people,” explains Strayer. “Last year, JDK and their design is what really made that whole event shine. They kind of told us what to do and it’s been an invaluable experience to learn how to work with other vendors, learn what they’re good at and really just at the end of the day, try to make everybody look good.”

The JDK Strayer refers to is The JDK Group, the local event planner and catering company that produces Simply the Best. David Everett, Senior Wedding and Event Planner for JDK, who conceives the theme, worked closely with the Stray team to provide inspiration and instruction.”I would say we’re not the backbone, we’re like a vertebrae,” Strayer says with a laugh.

“We met with David and his team a few months beforehand and walked into the ballroom. It’s clean and it’s nice but there’s nothing unique about it, it’s an empty ballroom. And David and his team had a vision for what they wanted to communicate in terms of the vibe. They are really good to work with because he has an understanding of how the production world works, he doesn’t just say, ‘This is the effect I want,’ he says, ‘This is what I want you to do to get the effect.’”

Last year’s Simply the Best was the first year Stray worked on the party and it was quite the undertaking, with several hundred LEDs being used to light up the night, three trucks and trailers needed to transport everything and as Strayer describes it “all hands on deck” for their staff.

But the Stray team is getting used to big parties. In June, they produced a large-scale birthday party that was held at the Lancaster Airport. That’s right, IN an airport hangar. Strayer says they carpeted 5,000 square feet of hangar, bringing in furniture, lighting, decorations and sound.

“They came to us and asked us to produce the entire event from start to finish. We were coordinating ice bars, we had a waterfall wall and talent came in. I think we’re evolving with what we offer as demands come in from our customers,” adds Strayer.

It wasn’t always glamour weddings and parties for the couple. Strayer says that Chris started the company in 1999 just as like a part-time hobby. “He bought some used Par Cans from a company that was going out of business.” She says accumulating a few pieces of lighting equipment led him to realize that he could rent them out for almost the same cost of purchasing them.

“So he just started doing that on the weekend, going to these shows, setting up his little lights and for the first probably, up until the last few years, it was more of a hobby for him and he would take any money he got from it and he would put it all back into the company and buying more gear and growing the business in that way.”

Strayer and Chris have been married for 13 years and recently moved their business into Rock Lititz, a massive production hub that looks like a Hollywood studio set was dropped into the cornfields of Central Pennsylvania. Much to their surprise, they’ve already outgrown the space.

Weddings have become a major focus for Stray as couples now seek more than just a florist and event hall to make their day unique. Offering production, lighting, furniture rental and design elements, Strayer says that she’s most proud of the company’s approachability with the couples and families they work with. “

We have clients who come to us saying, ‘we want to do this’ or ‘we want to do that’ and I think it’s our job to figure out how we convey that look logistically speaking. What do we actually have to do to get from point A to point B and sometimes it’s a lot more complicated than ‘Oh, I’m just going to hang a light there.’

Sometimes there’s not something to hang a light from!” Strayer, who works directly with many of the brides and couples, says  people today want to make their weddings memorable and different. And she says, with an open mind, the right effects can transform a wedding space, even on a tight budget.

”Sometimes it’s as simple as drapery in a barn to make it a little prettier but sometimes it’s people coming to us saying, ‘Hey, we have this fire hall and there’s nothing particularly spectacular about it, but this is what our budget is. Is there something we can do to make this feel high end?’ That’s something we enjoy doing, thinking out of the box a little bit. I’m partial, but lighting transforms everything and you can have some pretty humble venues but you turn the lights off and switch some uplights on and I think it completely transforms the space.” 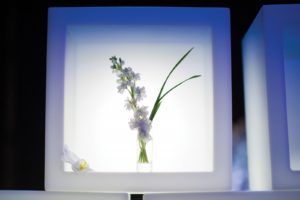 Contributing those creative talents to the community is also high on Stray’s priority list. Strayer says that lending a hand to local events (like Simply the Best) is one way the company feels it can give back. Each year they also provide lighting and production assistance to the Fire and Ice Festival in Lititz, a winter ice sculpture festival that takes place at Spring Park each February.

“It started with us just lighting the sculptures, but it’s evolved to us providing other services as well and we donate all of our services because it’s important to us to be a part of this community. Chris grew up here and we’re raising our family here.” But working in the winter can lead to some interesting moments for the team. “It’s always a lot of fun,” explains Strayer, “but it’s really cold.

Two years ago we’re climbing in the ponds with waders, at one point one of the waders ripped on a rock and all that frigid water just came pouring in.”

And for those on a shoestring budget, Strayer offers this advice: “Almost all of our rental inventory is available for straight rentals. Obviously it’s a lot more inexpensive to go the DIY route and rent pieces and set them up yourself.”
“One thing that sets our company apart is that we are really dedicated to our clients. It’s important to us to get to know our clients as much as we can, we want to get inside their brains and base our designs off of that. It’s an intimate relationship and a real privilege that our clients trust us.”