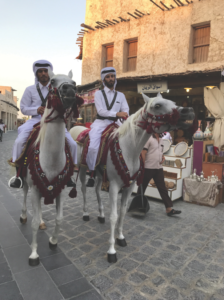 Forget what you think you know about Qatar, if you think you know anything at all. The tiny country on the Arabian Gulf may be the wealthiest in the world right now, thanks to immense deposits of oil and natural gas, but traditionally it hasn’t been a hot spot for American vacationers. Last year a little more than 100,000 visitors arrived in Qatar from the U.S., many of them no doubt to see family stationed at Al Udeid Air Base, the largest concentration of American military personnel in the Middle East.
It’s a shame more Americans haven’t sampled the exotic delights of Qatar and its shining, showstopping capital, Doha. The country is safe – the World Economic Forum just ranked it as one of the top ten countries in the world for “safety and security” – and moderate. Women need only to cover their shoulders and upper arms and make sure their skirts and shorts fall beneath the knee. And with Qatar Airways flying non-stop to Doha out of Philadelphia International Airport, it’s also a no-hassle trip for those in the Mid-Atlantic – including, of course, Harrisburg residents. Should you decide on a visit, there are a few experiences you shouldn’t miss.
Begin your journey by familiarizing yourself with the story of Qatar by visiting a few of its stellar cultural institutions. The country’s history is fascinating; for centuries a center for pearl diving and trading, it has long been home to Bedouins, the nomadic people who have traditionally roamed the desert regions of the Arabian Peninsula. Al Zubarah, Qatar’s first UNESCO World Heritage Site, includes the 250-year-old remains of the once-bustling port town from which the site takes its name. Located about 50 miles from Doha, it boasts nifty relics, like the heavy stone weights pearl divers would use to pull them as deep as 85 feet beneath the ocean’s surface.
Meanwhile, the Musheireb Museums in Doha offer four museums in one, each located in a century-old restored historic home. The Company House explores the oil boom that ushered in Qatar’s modern era, from the first test oil well dug in 1939, when the country was still a British protectorate, through 1971, when Qatar won independence. It also celebrates the men, many former pearl divers, who toiled long and grueling hours in oil fields far from their families to help give rise to the country’s oil industry.
It’s a fascinating trip through time, but Qatar’s finest museum remains the jaw-dropping Museum of Islamic Art. Designed by superstar architect I.M. Pei, it boasts five floors dedicated to Islamic art through 1,400 years and across three continents. Persian rugs, suits of armor, illustrated Qurans, plus modern necklaces from India, a Moroccan wooden arch dating to the 1600s and curtains from 15th-century Spain – the museum is so filled with magnificent treasures you’ll want to spent the whole day there. 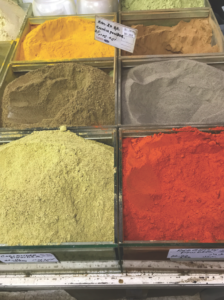 Just make sure to give yourself some downtime if you do, so you’ll be at full strength to wander Souq Waqif, Doha’s wonderful traditional market that twists down narrow alleys lined with tiny shops and along plazas edged by open-air cafes. Nighttime is the right time to visit the souq – as you might guess, Qatar’s summer temperatures skyrocket during the day, though in spring and autumn they can hover pleasantly in the 70s and 80s. But there is a magic to the market at night, especially with a full moon rising over Fanar Mosque’s gorgeous spiral minaret.
Along with emporiums selling Middle Eastern goods like jewelry, perfume, clothing, spices, musical instruments, ceramics and much more, there are stores dedicated to falconry, the ancient sport beloved by Qataris. Falconers can buy anything and everything they need in the souk, including the magnificent birds; there is even a hospital for raptors there. Equally as transfixing is the stable for Arabian horses; you can stroke their noses if they’re feeling calm. Take a peek at the camel enclosure (they’re more expensive and cherished than horses in Qatar because they are so resilient in the desert) and make sure you get an Arabic coffee, made by boiling powdered beans and adding cardamom.
There’s loads more to do in Doha – try and find the time to visit The Pearl, the massive man-made island built to the tune of $15 billion and resplendent with restaurants, marinas, villas, residential towers, hotels and plenty of high-end shopping. Speaking of hotels, the city is home to some of the finest in the world. You can take your pick, but why not stay where former First Lady Michelle Obama did when she visited Qatar a couple years back?
The St. Regis Doha sits in a prime location between The Pearl and the City Center, but it’s the luxurious amenities the hotel offers that can’t be beat. Splurge for a John Jacob Astor Suite, which comes complete with not only a magnificent view of the Gulf but also a butler, and don’t forget to visit the property’s Olympic-sized pool, one of the few Doha hotel pools cooled to stay refreshing even in the depths of summer. (If you’d like to dip your toes into the mysterious waters of the Arabian Gulf, it’s waiting for you, right beyond the pool.) The hotel’s Remede Spa is the biggest in the city, with 22 treatment rooms, but it still manages to feel private and relaxed. Book a Remede Customized Massage with aromatherapy to soothe aches lingering from your flight.
Opulent, safe and charming – even the immigration officers at Doha’s airport are surprisingly welcoming – Qatar awaits American travelers in search of the next great Middle Eastern destination. Move over Saudi Arabia. Make way, United Arab Emirates. Doha is every bit as gleaming and gorgeous as Dubai and Abu Dhabi. And with non-stop flights departing from Philadelphia on Qatar airways, it’s a snap to get there.
For more information, visit visitqatar.qa and stregisdoha.com.