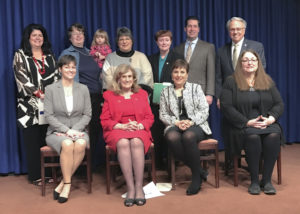 Joanne Clough still isn’t up to snuff. She maybe shouldn’t even really be out of bed. Just a week or so ago, the 61-year-old Camp Hill resident was taken by ambulance to UPMC Pinnacle West Shore Hospital after complaining of a bad chest cold for more than a month. Turns out, Clough had pneumonia, though everyone, including her doctor, believed she was simply exhausted from running around after her granddaughter, Carter, who is two. Clough has been looking after Carter pretty much single-handedly since December 3, 2016, when Clough’s daughter, Emily, died of an overdose. She is one of an estimated 82,000 grandparents who are caring for nearly 89,000 grandchildren across the Commonwealth. It’s a figure that has skyrocketed over the last several years, and looks likely to continue to do so, thanks to the opioid epidemic sweeping the state and country.

“I worry what would happen to Carter if something were to happen to me,” says Clough.“I was in the hospital for five days. Before I could even call an ambulance I had to get somebody to come and stay with Carter, because otherwise they would have had to call Child Protective Services. So, I got my secretary to stay with her overnight and then I messaged her other grandmother and she kept her all week at her house until I got out again. I was discharged from the hospital with AFib and pneumonia and had her back at the house again three hours later by myself.”

Clough, a family law attorney with her own practice in Camp Hill, has been working with a state House Children and Youth subcommittee for grandparents raising grandchildren in hopes of getting help for the state’s overburdened, underserved kinship caregivers. Rep. Kathy Watson (R-Bucks/144th), Chairman of the House Children and Youth Committee, has sponsored legislation to assist these grandparents, as has Rep. Eddie Day Pashinski (D-Luzerne). Pashinski’s House Bill 1539 would grant grandparents temporary guardianship when the grandchild’s parents are unable to care for them due to substance abuse. House Resolution 390, also sponsored by Pashinski, would direct the Joint State Government Commission to study the issue of what’s become known as grandfamilies and report its conclusions to the General Assembly.

“Over the past few years we’ve held hearings and heard so many tragic stories about grandparents struggling to care for their grandchildren,” Pashinski noted in mid-March, when he helped unveil his and Watson’s legislation at the state capital. “It’s time that we as a legislature act to help these grandparents…There is a myriad of issues that grandparents raising their grandchildren face and the bills outlined today are only the first few steps at helping those who are struggling. The bottom line is all of us, especially the grandparents, want what’s best for the grandchild. I believe we’re on the right track toward ensuring caregivers have the support, information and legal rights they need.”

Watson’s legislation, House Bill 2133, would establish the Kinship Care Navigator Program. Through this program, via both a website and a toll-free hotline, grandparents would have free, easy access to information about the support and services available to them. A specially-trained navigator would act as a liaison and mediator between kinship caregivers and the federal, state and local agencies prepared to assist them. This is a critical step forward in aiding grandfamilies, because grandparents are often reluctant to ask for help from private and public resources. Even if they know about them, many don’t reach out because they fear they’ll attract the attention of the child welfare system and either lose their grandchildren or be told how to raise them.

But make no mistake, grandparents need help. “Even if you had good financial planning when you retired,” Watson says, “and you had a pension or 401K or whatever, never, in any financial planner’s formula, is raising a second family included. There is a natural order of things – we have children when we are younger because we’re better equipped physically to handle and raise a child. So you have deal with the physical demands, but you also have to deal with the economic demands.”

Helping these grandparents helps everyone, including the taxpayers of the Commonwealth. According to a hearing held last year by the House Children and Youth Committee, grandparents who are raising grandkids are saving Pennsylvania some $1 billion a year in foster care costs, an estimate that is probably low, because many grandfamilies are not known to the state and so are not included in statistics. And studies have shown that children raised by relatives do much better emotionally, mentally and physically than ones placed in foster care, lessening trauma and helping them thrive instead of merely survive. These kids have a much better chance of growing up to become productive members of society.

“Quite frankly, if you don’t care about the human side of this story,” notes Watson,
I would suggest that in terms of economics it is much better to deal with it at this level than in effect to raise children who are bandied about from place to place, from foster home to whatever, and then we know they have a high rate of not graduating high school. They have a high rate of all kinds of run-ins with the law, so we don’t want a generation of that coming along. It’s much more expensive at the other end. Aside from being not very human or kind, it is also financially a problem at the other end, so we don’t want that.”

Locally, some grandparents are taking advantage of a valuable resource for struggling families. Roughly 15 percent of the more than 2,000 students in grades pre-K through 12 attending Milton Hershey School have been sponsored by a grandparent. In March, the private boarding school, which provides the highest-quality education at no charge for students who come from lower-income families, offered a special informational event for grandparent caregivers. It was an event driven by the uptick in inquiries to the school by grandparents and a desire, says Milton Hershey School Admissions Marketing/Recruitment Coordinator Kathy Smith, “to share information about our school so grandparents know about our program and can make an informed decision about beginning the application process.”

The school, as Smith adds, can greatly help grandparents by “addressing the challenge of day-to-day supervision and care for their grandchildren. …Milton Hershey School can be a life-changing option for families looking to help their grandchildren work toward a brighter future.”

Kelly Dunaway and her husband, who live in Colonial Park, enrolled their grandson, Ayden, in Milton Hershey when they took over caring for him at age five (he’s now in third grade). According to Dunaway, some of the many positive benefits of the school include, “knowing that he is acquiring a high quality education where he can focus on his education without distractions or worries. We know he is safe there. Having him at MHS gives us peace of mind. …knowing that when he fulfills his commitment there and completes his education he will have many options open to him that will enable him to be a successful contributing member of society. He will possess the skills and will have the resources he needs to choose and fulfill his life’s passion.”

Meanwhile, across town, Clough continues to struggle with the day-to-day stresses of raising a two-year-old at a time she should be closing in on retirement. Monetarily, the demands are enormous – last year Clough, who is also putting her second daughter, Diane, through college, paid nearly $15,000 in day care for Carter, which she describes as having “just destroyed” her financially. Long divorced, Clough says that just as difficult as making ends meet is keeping up with her granddaughter. “Catching a toddler is a whole new ball game when you’re my age,” she explains. “I always say I can only do zone defense, the man to man is out of the question.”

Still, hard as it is raising a toddler in late middle age, stressful and scary as it is, Clough says “It would never cross my mind in a million years that I wouldn’t do it. She went to bed on a Saturday night and she woke up on a Sunday and her mom wasn’t here. It was important to keep the rest of Carter’s life as normal as possible and to keep her in this house with me. She’s usually a very happy, lovely little child. I see the joy and love in her, and my daughter Emily continuing on through her – and some of things she does so identically to her mother it’s scary. It does remind you of the cycle of life. Thank goodness she does have me to be here for her. I wouldn’t trade it for anything. I wouldn’t wish this on anyone, but I would never step away from it as long as I’m physically able to do it.” 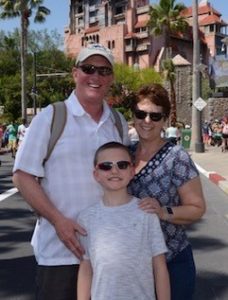 The Dunaways of Colonial Park