Kids come with smiles. And tears. And big imaginations. And stuff. Lots of stuff.
Today’s families demand homes that are just as adaptable and hard-working as they are. Flexible spaces, parents know, can adapt as kids grow. Parents also want spaces where their children can dream big and where a little roughhousing won’t get anyone in trouble. In these spaces – a city row home, a new build and a crisply stylish nursery – kids can be kids.

Samantha, 9. Noah, 7. Joshua, 5, Ben. 4. Samantha is excited to have her own bathroom. Noah is ready for video games in the game room. Joshua and Ben don’t yet realize the importance of a custom-built home for this active family. They just wrestle wherever there’s a carpet. Or sometimes a chair.

The Hetrick family is settling into their new home in Arcona, the Charter Homes community in Lower Allen Township. Before deciding to build new, parents Debbie and Stephen Hetrick searched for a suitable existing home.
They needed room, of course. Both nursing managers, they also needed a location convenient to Debbie’s employer in Carlisle and Stephen’s in Camp Hill. Plus, Debbie wanted a nice, clean space to start in, after a year crammed into a two-bedroom rancher in Mechanicsburg. Finally, they realized that building was their best, most affordable option.
“This was our Christmas gift to ourselves,” says Stephen.

The Hetricks wanted a home that would suit the family for years to come. Amid Arcona’s friendly neighbors and green spaces, they found a hilltop lot backing up to a line of trees. Across the street, a grassy plot features sections of the trails that wind through Arcona – an area that Debbie immediately envisioned as a race track for her active kids.

They chose a four-bedroom model and, adhering to their budget, decided on just enough upgrades to accommodate family life:
•    Opting out of a two-story foyer, the Hetricks converted the air space inside the front door into a second-story Jack and Jill bathroom. On one side, Joshua and Ben get a room. On the other, Noah has a room. The boys’ tile shower, says Stephen, is the nicest bathroom in the home. Across the hall, Samantha gets her very own bathroom to go with her bedroom.
•    Thicker carpet padding, to extend the life of the rugs.
•    An expansive front porch, where the parents can watch the kids play outside.
•    Extra storage in the garage and basement for all that kid stuff.

A nook snuggled between the foyer and stairs is the place for coats, book bags and the “20 pairs of shoes” that Debbie says are scattered around the first floor on any given day.
The two youngest Hetricks still have the big toys ubiquitous to early childhood, so the area designated as the study, just inside the front door, is actually their playroom.
“I wanted them to play in the same area where I am, instead of in the basement,” says Debbie. “I want to be able to sit in the TV room, and they can play over there.”

At the top of the stairs is the centerpiece of kid-friendliness – a wide open game room. That second-floor flex space is a popular option for today’s families. Here, all the bedrooms open onto the space. It’s the place for Noah’s video games, plus television and board games like Trouble (“They like that popping noise,” says Debbie).
“I’m envisioning lots of sleepovers in the game room,” she says.

The Hetricks can already see a day when Noah leaves for college and a younger brother gets his room. Until then, there will be plenty of evenings when the family isn’t at home, when kids are playing soccer or baseball or going to swim practice. The Hetricks believe they found their balance, choosing a model and upgrades that suit the family while leaving room in the budget for the usual expenses of daily life.
“We just wanted something where our kids can grow up in and have room, and still afford to live,” says Stephen.

The nursery, designer Sherri Blum tells expectant parents, “doesn’t have to be babyish.”
“The baby doesn’t care,” says the owner of Jack and Jill Interiors, Carlisle (jackandjillinteriors.com). “The baby needs food, warmth, clothing and some stimulation, of course, but the baby should be getting stimulation through things outside of the walls.”

Instead, parents who decorate to their own tastes, choosing their preferred colors and themes will find that place of “calm or Zen or whatever it is you want to surround yourself with” during long nights with a hungry or sick child.
Blum found her niche designing children’s rooms in the mid-1990s and has developed a following among parents locally and nationwide, including a few celebrities. Today’s trends gravitate toward nature, with scenes of woodland animals amid trees and greenery, but old-fashioned florals are staging a comeback, with little girls growing up in rooms festooned in cabbage roses.

A crisp room for twins, a boy and a girl, demonstrates Blum’s design approach. The new parents’ beloved fur babies inspired a dog theme, deployed in selected spots on walls and shelves. The mom loved aqua tones, which Blum incorporated into the room with cool black and gray, plus a butter-yellow ceiling for warmth. New cribs in black introduced vintage design updated to modern safety standards.
To keep the budget in line, Blum augmented a pricey, aqua-toned chandelier that she sourced with another find – a similar, scratch-n-dent Pier One lamp spray-painted to match. Leftover spray paint brightened the babies’ wooden initials, purchased from Etsy, that now hang on the wall behind the cribs.

Floors are hardwood, for easy cleaning and to minimize dust and allergens.

“You can have a nice warm area rug,” best in easily cleaned, hypoallergenic wool, Blum says. “You can shake it and clean it and put it back in.”

Blum offers these tips for designing kid spaces:
•    Spray paint gives new life to old items. “If you have an old chandelier, spray paint it a bright pink, and put it in your nursery,” Blum says.
•    Try to avoid elaborate murals, “because baby is going to grow up, and maybe they’re not going to like Winnie the Pooh.”
•    Adapt to superhero phases and fads with inexpensive, easily swapped-out items, such as sheets and wall decals. “It’s usually a short-lived phase,” she says. “They move on from Superman to Batman before you know it.”
•    If that item you just love is a budget-buster, apply it in small doses. Blum used a high-end dachshund wallpaper in the twins’ room on one accent wall.
•    Because nurseries are often the smallest room in the house, and because babies come with a lot of stuff, “use the cube, and work up the wall.” Stack cubes or install shelving high up toward the ceiling. A bench under a window, lit by a wall sconce, can be a reading nook with bonus storage underneath.
By the time they’re tweens, children start having their own décor ideas, and sometimes, compromise is needed. When a teen boy and his mom once clashed over his wish for black walls, Blum suggested a chocolate brown that suited both. She also assigned “homework” – mom and son working together to tape out and paint a striped bulletin board.
“The mom was so tickled,” says Blum. “They had fun. Plus, it gave him some ownership of the space. When kids have ownership, they might take a little better care of things.”
The right design choices can also promote family peace. In one home, the dad resisted but finally agreed to the idea of a dual-use vanity and desktop in a garret room being redesigned for his 9-year-old daughter. The vanity, Blum noted, would alleviate morning fights over access to the lone bathroom shared between the girl and her two brothers.
“No sooner did we get the room finished than daddy walks in, and she’s sitting there primping in her little mirror,” Blum said. “He told his wife, ‘Call the designer, and thank her for me.’”

What does Lemmy Selkowitz think of the circular shag rug tucked into the turret of his room, set under an array of colorful lanterns and attended by a stuffed giraffe and Yoda?
“Beautiful,” he says as he lolls on the shag rug. “Beautiful, beautiful.”
The home 3-year-old Lemmy shares with parents, Anela Bence Selkowitz and Adrian Selkowitz, is Midtown Harrisburg turn-of-the-20th-Century chic. It is also comfortably equipped and fully dedicated to family life, giving Lemmy room to let his imagination run wild in his own spaces.
The Selkowitzes met and married in California before moving back to Adrian’s Harrisburg-area hometown. After living in a few other spots, they searched for a roomy city home with natural light and found it with this three-story, end-unit town home.

“I wanted to feel like I had a lot of community around me,” says Anela. “Something big and kid-friendly.”

They knew immediately that the open, carpeted hallway space on the second floor would be the playroom for the baby who was born soon after they moved in.
Adrian is a partner with Cowboy Bear Ninja production company. Anela is a photographer, designer and a partner in Stash vintage clothing. Watching friend Aaron Carlson, owner of Little Amps Coffee Roasters, and his wife Kara raise their son inspired the Selkowitzes to have a baby of their own. Like many first-time parents, they thought the baby would adapt to them and their lifestyle.

They know otherwise now, but the house has been accommodating (although they have learned that older homes and vintage furnishings can require extra attention to baby-proofing). With its open first floor, a parent in the kitchen has a good view of wherever Lemmy happens to be. Pocket doors separating the kitchen and living room are handy sound dampeners when visiting friends gather around the kitchen table – made from two doors by Adrian’s grandfather – while Lemmy is upstairs sleeping.

On that second floor, Lemmy has his turreted bedroom, furnished with pieces that belonged to Adrian’s late grandparents – a dresser, armoire and a mid-century modern swivel chair re-upholstered in fabrics that belonged to his grandmother. The hallway playroom gives the adorable, energetic Lemmy all sorts of playtime choices, with its trampoline, tipi and interlocking mats that have been known to be reconfigured into an airplane.
In a nook of the spacious kitchen, Lemmy has his own mini-kitchen layout, with toy stove and kid-sized table and chairs made by local furniture craftsman Misha Raschock, a Selkowitz friend. The chairs were designed to turn into stools when laid on their sides. Throughout the house, the accumulation of stuff that comes with kids goes into strategically placed baskets. 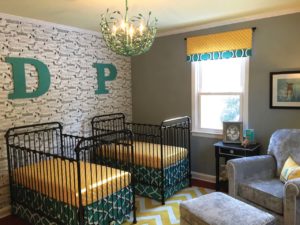 “I don’t like to buy things that I’m not going to be able to re-use outside of having a child,” Anela says. “I would never buy a very specific kid’s toy box. I can use these baskets for anything.”
In this neighborhood, where Lemmy is a prolific sidewalk chalk artist, the community is exactly what the parents dreamed. Lemmy plays with friends. He rides in the stroller while his parents jog along the river. Sometimes, there are excursions to Fort Hunter Park.

Boss, the family’s 13-year-old, 100-pound shepherd-retriever, patiently allows Lemmy to lie across him, although Boss has learned to avoid getting bumped by finding another room when Lemmy starts riding around in his race car.