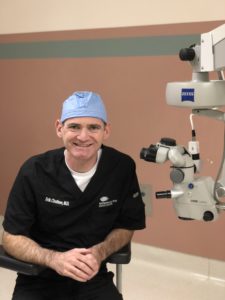 Driving down Linglestown Road, a passing motorist might never appreciate the innovation that has occurred within the walls at Memorial Eye Institute here in Harrisburg. But anyone who has had their vision restored here (which appears to be a pretty good portion of the region!) would understand, picture perfectly.

The practice was started in 1977 by founder Dr. Bennett Chotiner, an ophthalmologist from Pittsburgh who, while doing his medical training in Hershey, decided to settle down in the region. What started with a small office in Harrisburg has grown into one of the leading eye surgery centers in the state. The philosophy has always been the same for Dr. Chotiner — passion for innovation leads to superior outcomes. He’s demonstrated this time and time again, always on the cutting edge of technology, always investing in new equipment and always learning new eye surgery techniques. It’s how he’s grown the practice from a small office to a free-standing eye “mini-hospital,” right here in Harrisburg.

As Dr. Chotiner offers a tour of the facility, it’s easy to be impressed by what he’s created. The facility was recently renovated and Dr. Chotiner says it is now one of the largest facilities of its type in the country. Sweeping cathedral ceiling and an enormous 84-inch TV greet patients in the waiting room. The reception area isn’t just a little window or desk, it looks more like Mission Control and the operating rooms are vast empty spaces with very expensive machines as their centerpiece (we’re talking $400,000 expensive).

“We offer comprehensive eye care, there’s basically nothing we don’t do,” explains Dr. Chotiner as he goes from room to room, giving off the specs on machines, their features, functions from memory. For anyone into high tech gadgetry, this would be pretty cool. Dr. Chotiner’s was the first practice in the country to own the latest surgical microscope and he invested in a laser assisted cataract surgery machine as well.

Every operating room has cameras recording the procedures. Families can even watch in real-time on the big screens their loved ones’ procedures (but that’s completely voluntary). “It’s a comfortable, convenient and cost-effective setting. We were the first optomic surgery center in Pennsylvania.” Some of Dr. Chotiner’s staff even guess that he may own every diagnostic piece of equipment and brand new instrument known to man. It’s hard to argue with that as Dr. Chotiner points to the eight brand new, just out of their package, eye exam machines.

Eye care has advanced in the last few decades from temporary artificial fixes to correct vision like contacts and glasses to the new and exciting world of restorative surgery — procedures, like LASIK that can, in less than 30 minutes, transform someone’s vision with immediate and lasting results — and no glasses to wear. Dr. Chotiner has always embraced this innovation. He was the first practice in the region to perform LASIK and his was also the first practices to use a laser technique for LASIK. “For three years, back in 2003, we were the only practice to do all laser LASIK surgery, where we made the flap with the laser rather than the mechanical blade.”

Among his other “firsts,” Dr. Chotiner was the first physician in the state to do modern cataract surgery using small incisions and ultrasonic devices. This type of innovation has made cataract surgery a minor procedure compared to what it once was. “When I was in training, 50 years ago, people with cataract surgery stayed in the hospital for a week, before that, 60 years ago, people had to be in sandbags for six weeks,” Dr. Chotiner explains, referring to the bandages patients once had to wear while remaining bed-ridden after the procedure. Patients and doctors alike would put off such significant surgery until a patient could no longer see; now cataracts can be removed with relative ease.

For Dr. Chotiner, his practice at Memorial Eye is a family affair. Most of the staff have been with him for years, if not decades and his son, Dr. Erik Chotiner is following in his father’s footsteps as an ophthalmologist, and is a Fellowship Trained corneal surgeon, specializing in corneal inlays and implantable contact lenses (ICL). “I just did an ICL last week on a patient and it has one of the biggest wow factors.,” explains “Dr. Rik” as his dad calls him. “When you’re talking about patients that are this nearsighted, the effects are really dramatic. It only takes about 15 minutes to do, we do both eyes in the same day.”

How exactly does an ICL work? Dr. Rik explain, “If you’re extremely nearsighted there wasn’t a good surgical option for you. About 11 years ago the implantable contact lenses was introduced and we started using them. It’s a thin implant that sits in front of the natural lense and we can correct up to -17 of nearsightedness.”

That sounds impressive, but it’s not until you hear a patient describe the difference do the effects really become evident. Kimberly Yakowski, the center’s Director of Communications used to be severely nearsighted at -11. “I was functionally blind. I could not drive. It had been that way since I was about five years old.” The younger Dr. Chotiner performed the surgery on Yakowski about a year ago and she says the results are still profound.

“It has been THE most wonderful thing that has ever happened to me. It was the best thing I ever did for myself because of the change it made in my life. For him to be able to do this. People toss out the phrase ‘life changing,’ but this truly was.It’s a wonderful skill that they have, to be able to share that with the world,” said Yakowski. Dr. Chotiner adds that their practice was one of the first to offer the procedure but now more practices are doing it today.

Those kinds of life changing moments can happen several times a day for the doctors. It’s a great feeling they all agree, but Dr. Chotiner wanted to do more for the community. From early on in the practice, he became involved in local charities and organizations in the region. Today, the list of organizations the practice supports is long and includes the JCC, Camp Hill school districts, West and East Shore school districts, the Leukemia and Lymphoma Society, the Camp Hill Library, World Physicians, Harrisburg University, the Harrisburg Symphony, and the list goes on.

As a team, the doctors have been active in the practice’s outreach program, where they offer free cataract surgery for patients without insurance every year. They’ve also performed LASIK on a few needy individuals, including a quadriplegic. One patient sticks with the newest member of the surgical team. Dr. Kenneth Levin was going to treat a Medicaid patient’s cataracts. “She was just a really friendly person and she tells me her job is driving foster kids with autism to medical appointments.” Dr. Levin learned that she was also very near-sighted and couldn’t afford the procedure. “So on the day of surgery, I offered to do the astigmatism correction for nothing additional. Everything about her is amazing. She’s 20/20 now and doesn’t need glasses anymore.”

“Some of the things we do are not covered by insurance,” explains Dr. Chotiner, “but we try to accommodate patients. It’s not about the money it’s about the patient. Obviously you need to get paid in order to be able to afford the technology, there is hundreds of thousands of dollars of equipment in each exam room.” But Dr. Chotiner, who cautions against being prey to the “bait and switch” techniques of budget LASIK facilities, says that the average LASIK cost of between $5000-6000 is less expensive than the cost of putting contact lens in year after year.

And the proof is obvious in all the near perfect eyesight in the office. It seems that nearly everyone, including some of the doctors have had their vision corrected in the office and everyone loves the results there. Adds Dr. Chotiner, “ I’ve been in practice over 40 years. We hope to be here for many more years. Our real goal is to provide the highest level of medical surgical eye care around.” That seems like a goal he’s already been achieving. 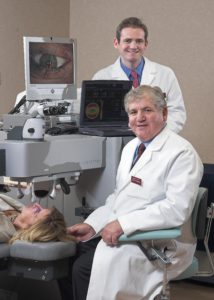