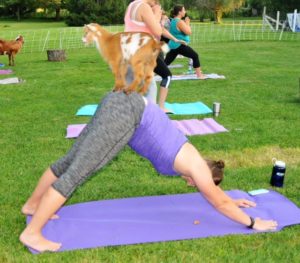 The health benefits of Yoga are widely known. It decreases stress, lowers blood pressure and increases flexibility. Add in some charming and playful goats and the results are BAH-fling!

At Gettysburg Goat Yoga, yogis can get up-close with these vivacious and curious barn-yard animals. Normally reserved as dairy goats, on the days when outdoor goat yoga happens at the farm, the goats spring to life studying the strange poses and making their human companions chuckle.

Goat yoga, or as it is affectionately called by its participants, “goga,” originated in Portland, Ore. Before spreading across the country. This new take on the popular fitness discipline is great for those looking for a few laughs and a fun way to spice up their fitness routine.

As with any animal, the effects have been scientifically proven to lower blood pressure, raise the serotonin levels in the brain and overall reduce stress,” says Owner Meagan Delawder

She adds, “I feel that goats bring a little more comedic relief into a yoga session than maybe a dog or cat would as the goats will run and jump around and its hilarious to watch. After seeing this, its impossible to leave in a bad mood! Some of the goats will come lay on you or push you off your own mat if they find it particularly comfortable, some will give you back rubs with their head and some of the babies may even jump on you.”

Delawder says there’s another benefit to working out with goats. “The goats don’t judge! I have had numerous people tell me that they have gone to yoga studios in the past and it’s too stuffy or they felt uncomfortable with their body or clothing as they walked into their first session. In Goat Yoga, no one is paying any attention to what brand pants you have on, they want to just see what all the goats are doing! It’s a great way to feel completely at ease and no judgement here,” she offers.

Goats aren’t the only four-legged visitors to frequent the classes. “We actually do have two potbelly pigs that have been known to join class,” says Delawder. “But the goats are certainly the main attraction.” 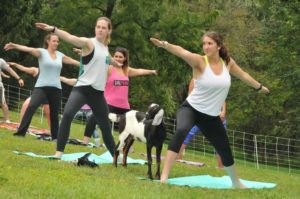 The instructors get a few laughs out of the goats’ antics, too. . “It always amazes me when a significant other is brought begrudgingly along to a class. I swear the goats can sense it and they make it their job to convince this person that goats are the greatest thing since sliced bread and will not leave them alone! It never fails,” she laughs

Goat Yoga classes at the farm started in June 2017. Classes start again for the year on April 7 and run until mid-fall (weather permitting). Class sizes max out at 45 – humans, that is. The number of goat attendees depends on the season. The herd can be rather large when babies are being born.

“We already have 15 babies born so far and more to be born almost every month through July,” Delawder says.

That’s cuteness overload and great motivation to take up Yoga. All of the proceeds from the classes go to a great cause, too.

“All of the money made goes back into the feed bill and needs of the animals. We also have children that lease our goats through a 4-H program and allows them to come work on the farm and show at the fair even if they live in an apartment. So, by purchasing tickets to a yoga session it allows us to give back,” Delawder says.

Before you go, check out gettysburggoatyoga.com for Dos and Don’ts of goat etiquette.