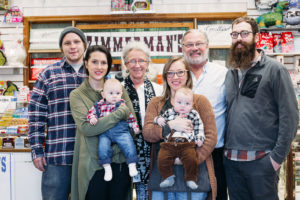 Whoever came up with the saying “like a kid in a candy store” must have had Zimmerman’s Nuts and Candies in mind. Once inside you will step back into a time of jawbreakers, giant suckers, Pez candy dispensers, and even candy cigarettes (remember those?)

A family owned and operated business for over a hundred years, today, the third and fourth generations of the Zimmerman family—Lee S. and Donna R. Zimmerman and their daughter, Olivia and son, Christopher, manage the business. And with the recent addition of two grandbabies—Owen Sterling Zimmerman and Brock Hering—the hope that a fifth generation will carry on what was begun in 1915 is certainly a very real possibility.

“My grandfather, John Sherman Zimmerman was orphaned as a teen, “says Zimmerman. “He came to the Penbrook area of Harrisburg from Perry County after he was adopted by Charles Fishburn, a local businessman who owned a feed mill. Through Uncle Fishburn, my Grandfather learned the roasting process. Eventually he branched out on his own and bought a small building in 1915 and began roasting peanuts and making peanut butter.”

In due course, Zimmerman branched out to selling and roasting coffee, in addition to other dry goods such as beans and nuts.

“After the stock market crash in 1929, my Grandfather bought a Burns Jubilee Coffee Roaster,” says Zimmerman. “We still have this vintage roaster, and it’s still going strong.”

Zimmerman says back in those days, the coffee beans were grown in Brazil and brought to Harrisburg via train. “My Father told me that there were loads of sacks containing the coffee beans to be hauled away and it would take over a week to get the beans to our store in Penbrook,” he says.

Employing the same process his Grandfather used years ago, specifically, the continential style roasting process where the beans are quenched with water when the desired color of the bean has been reached to abruptly halt the roasting process, Zimmerman’s offers three signature coffees.

Each year, Zimmerman’s also processes close to 800,000 pounds of peanuts from Virginia and North Carolina for their kosher certified natural hand-packed peanut butter. “The peanuts are roasted across the street from our retail store, just like it was done over 100 years ago, then ground and the resulting butter, high in protein with no carbs or trans fat is placed into plastic tubs,” explains Zimmerman. “The peanut butter will keep in the refrigerator for up to a year.”

In 1941, John Sherman Zimmerman II, enlisted in the Navy. Zimmerman’s says his Grandfather didn’t think his Father would survive WWII. As a result, his Grandfather took on George Wisman as a partner.

“However, my Father proved him wrong. He came back and joined the business,” says Zimmerman. “My Grandfather retired in the early 1950s and then my Father took over. He continued to expand and remodeling was undertaken to make the business more of a retail facility,” he says. “My Father ran the business until the 1970s and then I took over.”

In the late 60s, Zimmerman says his Father started to enlarge the candy selection, bringing in Asher’s Chocolates of Lewistown and Necco Confections, and adding customer favorites such as nonpareils and chocolate covered raisins.

Fast forward to 2018. Customers visiting Zimmerman’s today feel like they are traveling back in time with one difference; this time they don’t have to ask permission from their mothers to indulge in the candy they desire.

Tucked away on 2701 Elm Street in Penbrook, Zimmerman’s old-fashioned candy counters boast gummy candy of all shapes and sizes, fancy chocolates such as chocolate covered peanuts, chocolate malted milk balls and chocolate covered cherries, to name a few, dried fruits and nuts, and a numerous assortment of bulk candy spread out throughout the store. The store also stocks hard to find gourmet ingredients such as flavored extracts, fine baking chocolate, as well as a large assortment of sugar free candy. From one piece of candy to 10 pound bags and bars, Zimmerman’s has it all.

“We also make our own chocolates,” says Zimmerman. “Some of our customers’ favorites are our home-made chocolate almond bark, chocolate covered pretzel rods, and our rocky road.”

The home made pure chocolate molds are also popular during the holidays and Easter. “We use literally thousands of pounds of pure chocolate to make our holiday molds,” he says. “Customer favorites include our bunnies, turkeys, and nut crackers.”

“They stop by for bulk pecans and walnuts, glazed fruit, chocolate and candy coatings, and other supplies they need for holiday baking like sprinkles and colored sugar for decoration. They also come in for stocking stuffers such as clear candy toys, cut rock cubed candy, peppermint straws, chocolate straws, Misty Mints, and Pez dispensers.”

Zimmerman feels joy when his customers tell him that they bring their grandchildren to the store because of the wonderful memories of their grandparents introducing them to Zimmerman’s.

“You don’t know how many people tell me that they loved coming to the store with their grandparents who would treat them to sweets they would otherwise not have had,” he says. “Over time, we’ve come to know many of our customers on a first name basis. They’ve become our friends.”

It is obvious that Lee and Donna Zimmerman have carried on John Sherman Zimmerman’s theory that customers want and deserve quality. To retain that old-fashioned quality and freshness, the candy at Zimmerman’s is still made the same way with the same tried-and-true recipes. Using their family’s time-tested recipes and only the best quality ingredients for the products they make, the Zimmermans have assured their family business as a truly delicious piece of local history that is not to be missed.