Don't tell Eugene Showers that all who wander are lost. The way he sees it, the years he spent crisscrossing the globe, learning about everything from architecture to brewing, was all in the service of his new passion: The Lost Pint.

A mash-up of mobile classroom, pub crawl and history lesson, the one-man business began last October, when Showers debuted 10 Saturday-only private tours of the area. They include Civil War History, an excursion focusing on the War Between the States with a stop at the National Civil War Museum; Covered Bridges, which visits four of the picturesque wooden structures in Lancaster County; and Appalachian Trail, featuring a hike along the famous footpath and plenty of local A.T. lore to go along with it.

Showers’ first tour was a bit of a baptism by fire. His customers were a family of four from South Dakota who had booked the “Susquehanna River Valley” tour, an expedition exploring the area’s native geology and first peoples. Dad was executive director of a museum back home, someone who knew history, if not necessarily Harrisburg-area history. While Showers admits to being “a little intimidated at first,” soon his gregarious personality was winning the day – along with stunning sights like the Collins lock ruins, located along the eastern bank of the Susquehanna. 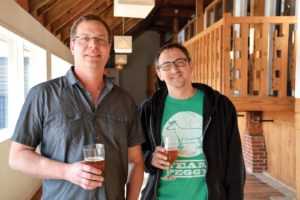 “The Collins lock was part of the canal system that dominated our area prior to the railroad,” Showers explains. “It brings to mind castle ruins – it was made of really beautiful stone – and it’s been there for almost 200 years. You can walk out to it and have a discussion, in this gorgeous setting, about the canals and locks, how they worked and what put them out of business.”

Showers, who is 46 and also works weekdays as a construction inspector, is a fan of Fort Hunter, too – he calls it “a really nice gem” – and Millworks, located beside the Broad Street Market in Midtown Harrisburg. The history appeals, certainly.

During the Civil War, the market helped feed the hundreds of thousands of troops stationed at nearby Camp Curtin, the conflict’s largest training ground. But it’s the beer brewed at Millworks that makes it an especially enticing Lost Pint stop.

“I’ve given probably six brewery tours for Eugene,” notes Jeff Musselman, Millwork’s brewmaster. “As the craft-brewing community continues to grow in Central Pennsylvania, so does the need to make breweries and beer part of our tourism. To my mind, that’s really an unfilled niche, and Eugene has done a great job of marrying these two industries, especially for us smaller brewers.”

A resident of Swatara Township, where he lives with his wife, Anna, and 13-year-old daughter, Amelia, Showers grew up in Carlisle. In 2008, he earned a master’s degree in American Studies from Penn State. In between, well, it’s a little hard to keep straight. There were architecture courses at HAAC before Showers hightailed it across the country, doing everything from playing in a band in Portland to working at the Nimbus Brewing Company in Tucson, often while camping out in a VW bus. He lived in New York City for a couple of years, moving to Belgium in 2002, where he taught English, photography and guitar to make rent while painting and taking courses at the Free University of Brussels. By 2003, Showers was back in Harrisburg, working as an unofficial assistant to the head brewer at Tröegs. He and Anna, who is Polish, wed in a castle dungeon in Warsaw, December 2003.

Showers’ business is in part an outgrowth of all the tours he has given for in-laws and friends visiting from Europe, as well as, he notes, “the culmination of all the things I’ve done. That’s why the Lost Pint is so dear to me. I’m selling me, my experience, my life – all the things I’ve distilled from my experiences. It’s about the manifestation of all my life’s endeavors…proving once and for all not all those who wander are lost, because I was wandering a lot. I was resisting and rebelling against society and not wanting to conform or work a 9-to-5 job. I was teased by my family. ‘Did you find yourself yet?’ So, this is also my way of saying just because I was wandering doesn’t mean I was lost. It just took me a while to find what I was looking for.”

And found it, Showers has. He seems, if his reviews on TripAdvisor are any indication, to be born to guide Lost Pint tours. Maureen Cissel and her husband, who were in the area from Odenton, Md. to celebrate Valentine’s Day, took a customized tour. They so enjoyed the day spent visiting breweries, Cissel booked the covered bridges trip for her extended family in honor of her mother’s birthday.
“During the day, Eugene adjusted as our needs and interests dictated,” Cissel says. “He never made us feel rushed. We felt like we were old friends by the end of the tour. We are planning to take a third trip this fall when the leaves are turning. It should be so much fun.”

Showers, who says he would eventually like to guide Lost Pint tours full-time, acknowledges that, along with his passion for everything from beer to local history, his charm is what makes his customers happy.
“I feel I’m pretty good at dealing with people, and I like to please people,” he says. “That’s part of my character, and to me, that’s what the tourism industry is about – you’re trying to put smiles on people’s faces. …But I guess I just finally came to the realization that if you want to do something like this, you’re going to have to create that opportunity for yourself. And that’s what I did. I wouldn’t be able to do any of this stuff I love if I wouldn’t have just stood up and done it on my own.”

For more information about The Lost Pint, visit thelostpint.com.