There is something intriguing about the early 1960s, the era portrayed in the TV show Mad Men. Maybe it’s the fashions—skinny ties and hats for men and, for women, matching shoes and purses, gloves, and hair styles impossible to maintain without hairspray; or maybe it’s the music or the martinis. Perhaps it’s the era’s timeless quality. As Nate Kresge, a Harrisburg resident who owns several props from Mad Men, said, “It doesn’t seem like that long ago, even though it was 40-some years in the past.”

If you love the early 60s, Mad Men or both, an era-authentic cocktail party may be just the thing to kick off the coming of Spring. It just takes a little creativity, some vintage clothes and a cocktail that would make Don Draper proud. 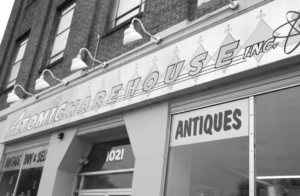 The Clothes
For women, 60s fashions were fun, flirty, coordinated and colorful. “For that era, I envision shift dresses and heels—both high and low,” said Anela Selkowitz, owner of Stash, an online vintage clothing and accessories shop. You can go with the Jackie Kennedy look, she said. “Jackie was a little more modest and grown-up.” The First Lady inspired a specific look marked by prim suits in pastel colors, matching pillbox-style hats and purses and, of course, gloves. Her formal attire was distinctly high fashion with lush fabrics and elbow length gloves.

Other fashion icons of the era—such as models Jean Shrimpton and Twiggy—wore shifts and swing dresses in brighter colors with bolder patterns and hats with large brims or no hat at all. Playing Laura Petrie on the Dick Van Dyke Show, which ran in the early 60s, actress Mary Tyler Moore popularized capri pants, fitted ankle-length slacks. She often paired these with cotton blouses, boatneck-style knit tops or cardigan sweaters.
“There was so much versatility in fashion that you can dress up or dress down,” said Selkowitz. If the party is an afternoon or outdoor affair, capris or sundresses with heels ‘kitten’ heels or ballet flats might be most practical. Add a straw hat and cat eye-style sunglasses for an extra flair.

For men, the style is classic. Harrisburg’s Andrew Kintzi, owner of The Midtown Dandy, an online men’s vintage fashion store, said, “Suit it up for the 60s. Double-breasted suits were actually popular, even though Mad Men’s Don Draper always sported single-breasted.” For ties, he said, skinny is a must. Selkowitz agreed, noting, “Those will be in fashion forever,” Selkowitz said. “This is one of the standouts in men’s fashion for that era.”
Kintzi advised men, “Don’t be afraid to do colors and textures. For example, plaid sports jackets and seersucker suits were popular.” Accessories from the era might include a hat—fedora or porkpie style—and classic Ray Ban shaped sunglasses. For a more casual event, he suggested “the preppie route”—club shirt and slacks.

Both Stash and The Midtown Dandy have retro clothing and accessories for the 60s. The Atomic Warehouse on Market Street also an array of vintage clothing and accessories. Thrift stores and consignment shops in the area also may have vintage or vintage-look clothes at bargain prices. Even some department stores have new items that have a retro look. Selkowitz noted that it’s not hard to find the right clothes for a 60s cocktail party. “A lot of the fashion trends from the 60s—such as the little black dress and pearls are classics that are still in style all these years later.”

For a Hair-Raising Experience
For complete authenticity, women might want to get a real 60s hair style, such as a beehive, French twist, or an over- or under- flip. According to Blaine Fasnacht of Hair Visions Ltd. In Harrisburg, expect to pay up to $100 for your up-do and schedule about 1-2 hours for the whole process. He suggested getting your hair done the day of your party, as it’s easy to mess these styles up by sleeping on them. 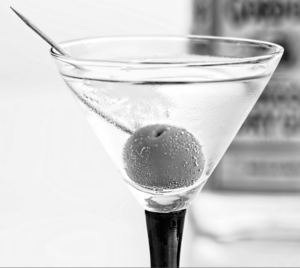 Classic Cocktails and Nostalgia Nosh
For your party libations, Kintzi suggested, “Stay with the classic cocktails.” Popular drinks such as martinis, old fashioneds, whiskey sours and Manhattans are not only true to the era; you can make pitchers of them in advance. You would often see punch bowls at parties in the 60s, filled with fruity concoctions and often made with ingredients such as orange sherbert and ginger ale. Of course, Kintzi noted, “If money is no object, you might want to hire a bartender. For a little extra retro flair, have him or her dress in period clothes as well.”
Fingers foods from the 60s often featured crackers topped with variations of cheese and canned meats. However, you can have authentic food that will appeal to a modern palate. In addition to 60s party staples cheese balls and deviled eggs, dips were popular. Among those that have an authentic flavor but also will appeal to 21st-century taste buds:
-Spicy mustard with sausage or pretzels
-Guacamole and chips
-Salmon mousse and crackers
-Artichoke dip and bread crisps
-Crab dip and crackers
-bruschetta
For dessert, think chocolate fondue with strawberries and pound cake squares, Jello molds or pineapple upside down and bundt cakes. At the same time, cupcakes are timeless, as are chocolate covered strawberries.
Sixties’ fare is perfect for self-service; you can just put the food out, and guests helps themselves. Of course, for a larger event, you can have 60s garbed servers moving through the crowd with trays of hors d’oeuvres.

Musical Musings
Your choice of music should depend on whether you want your event to be low key or high gear. For background music, consider the classic crooners—Sinatra, Tony Bennett, Dean Martin, Perry Como and Andy Williams. There were also many great female singers from that era, including Peggy Lee, Ella Fitzgerald, Shirley Bassey and Eartha Kitt. If you prefer jazz, Dave Brubeck, Oscar Peterson, Stan Getz, Duke Ellington and Louie Armstrong were all popular in the 60s. Folk music also was in vogue, so you might want to play some Pete Seeger, Woody Guthrie, Joan Baez, early Bob Dylan and Peter, Paul and Mary. Throw in some classic country with Patsy Cline, Buck Owens, George Jones and Johnny Cash.
If dancing is on the menu, early 60s rock featured the likes of the Beatles, Kinks, Rolling Stones, Buddy Holly, the Dave Clark Five, Paul Revere and the Raiders, Young Rascals, Yardbirds, Beach Boys and—of course–Elvis. Like soul? Then it’s the Temptations, O’Jays, Little Anthony and the Imperials, Ike and Tina Turner, Same Cooke, Percy Sledge, Smokey Robinson & the Miracles, Otis Redding and Ray Charles.
You can buy or download compilations of music from the era. If you have satellite radio, there are special channels, such as the 60s on 6, Elvis Radio, The Beatles Channel, Classic Vinyl, Seriously Sinatra and Real Jazz.
As you plan your 60s cocktail party, you might be surprised at how much people love the concept. Kresge, who is co-owner and executive producer of GK Visual in Harrisburg, said, “There is an allure about how different things were then and yet how similar they are today.” His love of the era and Mad Men led him to purchase not just Don Draper’s desk but a couple of cameras used in the show. “It was such a great show and an interesting period of history. Having a party that pays tribute to that time would be a lot of fun.”