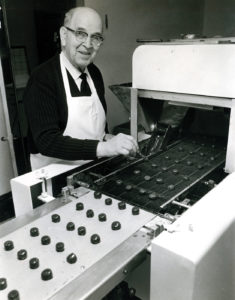 My Grandfather told me, “Don’t ever change anything I’ve done and you’ll be in business forever,” says Peter Matangos, owner of Matangos Quality Candies.  “And over the years I’ve done just that. I’ve followed his advice and it’s worked.”

Walk into Matangos and it’s like going back in time… a time when Matangos’ Grandfather, Christoforos “Pop” Matangos, was in charge.  Look around and you’ll see the same displays, hand stenciled signs, and counters that Pop Matangos relied on to showcase his homemade candies. Go downstairs and you’ll see the same chocolate making equipment, and marble top table where Pop rolled out the chocolate, caramels, and mint fillings.

“I’m a third generation candy man,” he says. “I still do things the old-fashioned way just like it was done when why Grandfather ran the shop.”

Matangos says his Grandfather was Greek by birth, but was raised in Turkey. “At a young age he learned the art of candy making,” says Matangos. He says his Grandfather was eager for a better life, so he boarded a merchant marine ship around 1914 and when it reached the New York harbor, he jumped overboard. “While in New York, he managed to join and proudly serve in the Merchant Marines and was granted US citizenship,” says Matangos.

“After being discharged from the Merchant Marines, Pop saw an opportunity to open a candy store and soda fountain in Allentown,” says Matangos. “Unfortunately, Pop’s business failed as did a lot of businesses during the Depression. Left with no other alternative, he moved to Scranton and worked for another local candy maker, Davis Candy.”

Pop Matangos eventually moved to the larger capital city of Harrisburg where he began working in the candy kitchen of Pomeroy’s Department Store.

“Eager to work on his own, in 1947, my Grandfather started Matangos Quality Candies out of his home on South 15th and Catherine Streets,” says Matangos. “This is the same shop and candy-making equipment that is in use today. I really haven’t changed a thing.”

Matangos says when his Grandfather opened the business he used the recipes and techniques he learned as a young man in Turkey. “He, in turn, taught them to me when I was 17 years old. I learned how to make all the flavorful fillings by hand and how to create mints so thin and tasty that Pop’s Venetian Mints remains our signature item,” says Matangos. “And like my Grandfather advised, I haven’t changed his recipe. I still use Wilbur Chocolate to make all of my hand-dipped chocolates.”

Matangos says his Grandfather not only coated his confection creations in the traditional milk and dark chocolates, but he was the first US candy maker to coat his candies in the sweet ivory chocolate. Pop’s Figaro and nut roll candies continue to be popular favorites, as well as his Grandson’s more recent additions to the menu: fresh chocolate covered strawberries and caramel apples.

Every piece of chocolate is hand made by Matangos who says he uses 300 pounds or more of chocolate and over 4,000 pounds of sugar each season. The “season” encompasses Thanksgiving, Christmas, Valentine’s Day, and Easter. The season is also the time when Matangos brings out the old fashioned chocolate molds used by his grandfather to make the chocolate bunnies, Santas, and turkeys so popular with his customers.

“When Christoforos died in 1977 at the age of 84, it was up to the family to keep up what Pop started,” says Matangos.  Today, he is a one-man band, making the candy and making sure that everything is done to keep the business going strong. While many of the mom and pop stores in the area are long gone, Matangos Quality Candies has proven that good business and great product stand the test of time.

The holidays are not complete without a trip to Matangos Candies that’s for sure. Stop by and the smell of chocolate will greet you the minute you step through the door.