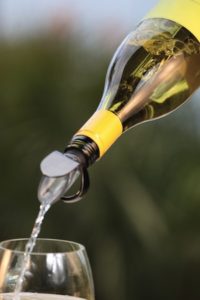 From its beginning to today, the wine industry has become entwined with Pennsylvania tourism and entertainment and along the way, has learned to make some darn good wines.

Paul Vezzetti hasn’t seen his vineyard in a week. On this early summer day, he lifts a leaf on the first row of vines, here on the hilltop where the delicate chardonnays live, and sees a hopeful sign.

One of Paul’s partners at the Vineyard at Hershey, attorney Jason Reimer, predicts that 2012 will be the best year ever for Pennsylvania chardonnay. Vezzetti, with his farming background, cautions that it’s too early to crow.

Like Vezzetti and Reimer, the industry represents equal parts hard work and hope, pragmatism and creativity. New wineries such as the Vineyard at Hershey were founded on a base built by pioneers, like Nissley Vineyards in Lancaster County. In between, a few farms, such as Shade Mountain in Snyder County, defied convention and converted to grape growing and winemaking.

From its beginning to today, the wine industry has become entwined with Pennsylvania tourism and entertainment – and, along the way, has learned to make some darn good wines.

J. Richard Nissley planted his first vines in 1972. “Then he built the winery and supplied it with equipment for making wine,” says daughter Judy Nissley. “His first vintage was 1977. We opened to the public the following summer, in July 1978.”

Winemaking is not for anyone looking for a quick buck.

Pennsylvania first legalized wineries in 1968, a mere three centuries after William Penn planted grapes. In the years between and since, growers and Penn State researchers experimented and hybridized vines that could repel pests and survive Pennsylvania winters.

Richard Nissley helped found the Pennsylvania Winery Association, which convinced the legislature in those early years to legalize sales on- and off-premise, and – quite shockingly – to allow Sunday sales at wineries.

“They recognized it was good for tourism in the state,” says Nissley. “More places to visit on a weekend – that’s better.”

Since the passing of Richard Nissley, the Nissley family – Judy, with siblings John, Joyce and Mary Lee – continues to grow grapes, make and sell wine and produce their iconic summer concerts. The winery sells its four wines only in central Pennsylvania. They could expand, says Judy, but that would mean dropping the concerts to save enough wine for broader sales, and “we really enjoy the concerts.”

“You can’t just expand your production by making more throughout the year,” she says. “The grapes are ripe at only one point in the year. To do more, you would have to plant more grapes and put in more grapes. How much do you want to expand, and how big do you really want to get?”

Still, wineries are a force in farmland preservation, Judy believes. Anyone who wants to make money on farmland surely isn’t eyeing the wine business.

Her dad, she says, would be proud.