Carlisle Journeys: Places of Memory and the Unfolding Stories from the Carlisle Indian School 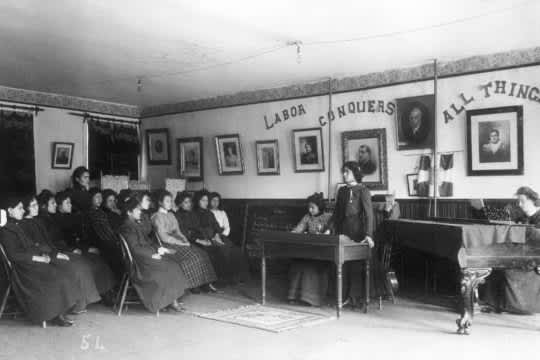 The year 2018 marks the centennial of the closing of the Carlisle Indian Industrial School (CIIS) in Pennsylvania. Carlisle was the first government funded off-reservation boarding school established to assimilate American Indian children into U.S. society. Founded in 1879 in the Carlisle Barracks, former home of the U.S. Army Cavalry Training School, CIIS became the model for two dozen more off-reservation Indian boarding schools in towns across the U.S. and Canada as well as on countless Indian reservations.

During its 39 years of operation over 9,000 students were transported to Pennsylvania to be enrolled in CIIS. Progressively, Carlisle’s mission to embrace “Indians” within American society was falling out of favor, when in 1913 a group of Carlisle students petitioned the U.S. Department of Interior. They demanded an investigation into Carlisle’s disproportionate emphasis on athletics, incompetency in teaching and administration, and excessive use of corporal punishment. The subsequent Senate investigation brought public censure and the dismissal of top Carlisle officials; the school’s glory days were over. An increase in the number of Indian schools in the West, accompanied by changes in public attitudes to educating Indians meant that the War Department’s request for the return of the Carlisle Barracks to house wounded American soldiers from the battlefields of World War I provided a perfect excuse for the closure of the Indian School in 1918. On August 26th of that year, Carlisle area residents came out in droves for a farewell reception for CIIS and a welcome ceremony for U.S. Army General Hospital No. 31.

This year’s Carlisle Journeys: Places of Memory and the Unfolding Stories of the Carlisle Indian School is intended to open a dialogue with the many descendant narratives and projects resulting from boarding school and post-boarding school experiences that have emerged during the century since CIIS’s closing. For this biennial conference the Cumberland County Historical Society will be partnering with Dickinson College and the National Native American Boarding School Healing Coalition to bring workshops, guest speakers, panel discussions and a major art exhibition to broad national and local audiences.

We are inviting descendants of CIIS students to come and engage with Carlisle community members, scholars and the general public. The Saturday, October 6 and Sunday, October 7, 2018 events will be held at the Historical Society. This year’s call for presentations is an invitation to descendants of CIIS students and their community members to share their stories of Carlisle and all Indian boarding schools in the U.S. and Canada. Please check back for more information as plans move forward.

The Carlisle Indian Industrial School left an indelible mark upon the sports that Indigenous Americans have played over the past century and a half. Our goal is to spark conversations about identity, cultural preservation, stereotypes, inequality, inclusion and innovation. Please continue to check our website (www.carlislejourneys.org) for updated information about the schedule.