Story and Photos by Danielle Debley 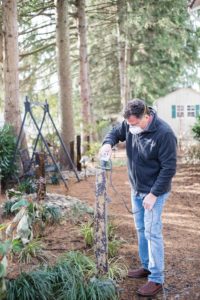 “I’ve always been artistic, and the kind of work I enjoy the most is the artsy type,” says Robert Wertz, of the Igneous Rock Gallery. Although he didn’t start out pursuing art as a career, he paints the beginnings of his career path as an artistic person within the landscaping business.

“The reality was, when I was a landscaper we mulched and cut grass and built paver patios; we had a certain amount of opportunity to make things beautiful, but the work had become less and less fun. The older I get the more I want to have fun, and if I’m going to work this hard at something, I want it to be fun,” says Wertz.

Wertz started off as a landscaper, and soon was drawn to idea of creating his own self-contained water features that would be natural, unique, and beautiful, unlike the tacky ones you might find at stores. In 2007, while visiting Nature’s Way, a bonsai studio in Linglestown, Wertz discovered the unique rock that he uses in all of his structures.

“I had such a hard time finding out who was quarrying this rock. I scoured the internet and finally found this woman living in the desert who had a picture of what looked like the rock on her garden center web site. When I reached out, she gave me the phone number of the geologist, Greg Prescott, who owned the rights to quarry and distribute the rocks.”

Wertz and Prescott formed a quick friendship over shared vision for the uses of this unique rock, and eventually, Wertz became Prescott’s sole buyer. The geologist and his partner, Billy Kelley, secured the rights to quarry this ancient volcanic rock.  It is called Beaver Canyon andesite, and is located in a very remote part of Washington State, close to the Canadian border.

“The story behind this stone is interesting,” Wertz says. “There’s only a few acres of this rock on the planet and it is approximately 45 million years old.” Wertz passionately describes it as “the most slender, colorful, and motion filled rock, with lots of twists and curves, which sets it apart as an artistic medium, from anything else that I’ve seen.”

The columns are truly magnificent. When looking at a few lined up in a design for a fountain to be built, each towering stone is so unique and vibrantly colored in different natural patterns. The tall, thin formations draw your eyes up and around, giving you the opportunity to explore the many facets it has to offer.

Since the spring of 2007, Wertz has been aware of the rock, but that first year, he was still a “gungho landscaper.” And as such, he and his team were involved in various home and garden shows around the area. In the fall of that year, they were prepared to exhibit at the Pennsylvania Home Show, as well as the Pennsylvania Garden Expo, both held in the Farm Show Complex.

“We wanted to do a big triple wide display for the shows. So sitting at a restaurant, we sketched out on the back of a menu a design for our booth. That’s when we said, ‘what about those stone fountains we saw at Nature’s Way?’ We thought if we could get that material here in time to make a couple stone fountains and make that a wow factor in our display, it would set us apart from the others.”

It was during that show, as he watched people react so positively to his new fountain creations, that Wertz exclaims he really got enthusiastic about what he was doing.

Since then, Wertz and his wife Beverly have grown their business into what it is today. Beverly used her planning, business and people skills to get her husband’s fountain sculptures into juried art shows. Now, Wertz’s fountains are exhibited in art shows up and down the East Coast and he does a lot of traveling to Florida. It was there that he met Fletcher Negele who comes to Pennsylvania to help out in the shop, alongside Jason Hall, a long standing and valuable Igneous Rock Gallery team member. Wertz plans on opening an auxiliary location in Florida, and is currently working on a beautiful fountain piece for a public building in Florida, as well.

Igneous Rock Gallery is on the web at www.igneousrockgallery.com.  They are also active on Facebook and Instagram.  The design studio and showroom are¬ located at 4702 on the Carlisle Pike in Mechanicsburg. Wertz shares his showroom wall space with fellow artist Douglas Koozer, owner of the Brain Vessel Gallery.

“When I took over running this plaza from my Dad, Doug was my first tenant. When I signed him on, I felt like this place really became my realm, and it is now starting to become a special space for artists, much thanks to Doug and the Brain Vessel crew.” 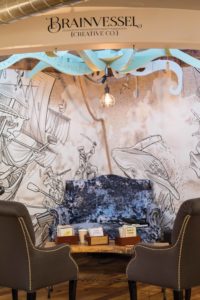 So you might be thinking, what exactly is the Brain Vessel Gallery? This art space, owned by Douglas Koozer and Jason Kreiger, is a collaborative collection of over 80 different artists’ work. From jewelers to painters to candle makers, Brain Vessel boasts a wide variety of different artistic merchandise for sale. Aside from their large collections of artistic work, they offer over 50 types of tea to enjoy.

“Even tea is an art form,” says Douglas Koozer. “Having a consumable product here in the gallery has really been a great way to bring people in.”

Koozer began his artistic journey through pursuing a degree in advertising design and eventually began to come alongside artists, helping them with their branding. Now, the gallery helps local artists throughout the area to brand themselves in a way that will bring more awareness to their designs and work.

“The name of our gallery came to me on a deep sea fishing trip. After being out in the water, realizing that there are fears above and below, I thought about how if danger gets close to you, you sometimes need to reach out and get other people to help you. Brain Vessel is kind of like that for businesses and artists; we build network and resources to get you to your destination efficiently and safely.”

The gallery hopes to launch some intensive workshops in 2019, which will be held on Sundays with three individual areas for three different workshops. These will look to accommodate families or couples, and the gallery will run tea service and catered lunches during the workshops as well.

“It’s kind of an upscale workshop environment. It’s like taking the paint night events to another level,” Koozer states. “We also want to work with entrepreneurial minded young people who may have a project, idea, or concept that we can take on once a year and help build that creative person.”

Artists like jeweler Richelle Leigh Walk have the ability to showcase their wares and sell them in the store, as well as have a workshop space to come in and create new products. Many people of the community are involved in this gallery. The artist featured in December was Jon Carraher who paints fantasy landscapes filled with magic and color. Each of the artists featured throughout the gallery have great items to provide.

The gallery offers space for events and showcases in collaboration with the Igneous Rock Gallery space. The level of community interaction is clearly tangible when you walk in and when you hear the heart of Koozer. He passionately explains his desire to build others up, and to tear down the stigma of galleries being “snobby.”

“It’s all about the experience. When you come in, expect something different,” says Koozer.

Whether you are an aspiring artist looking for help building your brand and company, or whether you just like the idea of supporting the local creatives in your community, take a ride down to the Brain Vessel Gallery on the Carlisle Pike, and grab a cup of tea while you look around.