It was a series of events that captured the hearts and imaginations of people on both the West and East Shores, as well as the country’s. It made boys heroes and stars.

It was a life-altering experience – one whose details and specifics are eerily beginning to repeat themselves. Then again, they do say that there is no greater teacher than experience.

There is something special going on within and around the Red Land Baseball Team. The Patriots are enjoying a spring season that has mirrored a similar one the Red Land Little League team experienced nearly 46 months prior.

As the great Yogi Berra might have put it, “Déjà vu, all over again.”

“I think it’s a little bit like, ‘Man those kids did it. We can do it too,’” continues Ebbert. “They believe they can win a state championship.”

“The boys got to see it on a grand stage,” says Red Land Junior Varsity Baseball Coach Tom Peifer. “They’ve always worked hard. We’re certainly not easy on them as coaches. I think what’s important is the knowledge that they can do whatever they set out to do.

“They’ve become much more mature around audiences,” says Peifer. “They realize their actions mean something. They know what kind of impact they can have on a community.”

Flashback to the summer of 2015, when there were both incredible joy and painful disappointment for the Lewisberry community-based Red Land Little League Baseball Team.

From Aug. 21 through Aug. 30 in South Williamsport, Red Land successfully competed in the 69th edition of the prestigious Little League World Series. Red Land earned the distinction of United States champion, but ultimately lost the world title to Japan, 18-11 in the final game of the tournament.

Along the way, there were two tense wins over Texas, impressive victories over South Carolina and Missouri, and a Mid-Atlantic Region championship. But there were also unbreakable bonds forged, life-long memories fostered and events experienced that simply cannot be reproduced in any other way.

Peifer was the head coach of that team then.

“They are great memories we will have for the rest of our lives,” says Peifer. “It was a fun ride. It was a once-in-a-lifetime experience. It was incredible.

“I’ve never seen anything like it in all of my years of baseball,” says Peifer. “It wasn’t just the Red Land community that got behind it. All the neighboring communities supported us as well. People still talk about it, and walk around with Red Land Little League t-shirts.”

“The funny thing is, I’ve known all those kids since they were six- and seven-years-old,” says Ebbert. “I just think of them as kids who grew up with my son. It was surreal, seeing kids you know forever playing on TV. It was just a fun time.

“I don’t know that they’re that much different as kids,” adds Ebbert. “I think it changed their expectations. They’re just normal kids. They’re not cocky or arrogant. They’re all just good kids.”

Now those kids are all grown up – well juniors and sophomores – and competing just as successfully on the varsity and JV levels. Of those 13 boys who comprised that Red Land Little League squad, ten are still playing for the Red Land High School teams.

Sure some have gone on to pursue other endeavors. Some have chosen to focus on other scholastic sports. And while the link to that special time and team is undeniable, it should be pointed out that are other players who weren’t directly associated with it that are contributing to the Patriots’ current success as well.

“They’re definitely related,” says Peifer of the success shared between 2015 and 2019. “Obviously that was a great group of players, but we weren’t the first. We’re not the only thing driving this team. There are seniors and juniors who have come together and embraced the younger kids. It didn’t start with us. There were some really good players in Red Land who came before that team.”

“We knew when they were little that it was going to be a good time for Red Land baseball,” says Ebbert. “We had expectations long before the Little League World Series team, and after that, everybody else had them, too. We’ve had good players and good teams every year. This year, we have guys who can play. We play baseball and don’t make it bigger than it is.” 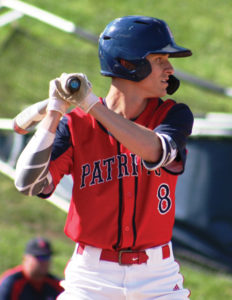 This spring, the Red Land Varsity Team won 16 of its first 17 outings, while the JV squad went 11-5. The Patriots were the top-rated Class AAAAA team in the District Three power rankings for most of the spring.

“Most years, we think we can get to states and make a run at it,” says Ebbert. “We definitely think that this year. When you get to states, anybody can beat anybody. Our goal at the beginning of the season was to win the state championship.

“Just like our ultimate goal was to be world champions, the players have their hearts set on being state champs,” says Peifer. “In 2015, we knew we would be good, but we didn’t know how good. In 2015, we didn’t let them look ahead. Hopefully, at the end of the season, we’ll still be playing.

“I think they know what it takes to do it,” continues Peifer. “They’re winners. They’ve always been winners. It’s kind of become the expectation at Red Land. There’s certainly very good baseball being played in Red Land.”

At its most basic level, baseball is simply boys playing in the dirt. It is that type of spirit, that love for the game, that accountability to teammates, once formed in Williamsport, that continues to drive the Patriots today.

“We’ve been playing well,” says Ebbert. “We’re starting to play as a team. We’re starting to come together. We just push each other. They don’t rest on their laurels, but we’re playing relaxed.

“I think they would be close anyway,” he continues. “They just have that experience. It’s like something else they never experienced.”

“They just want to be good teammates,” concludes Peifer. “They’re almost like brothers. They have their spats, but for the most part, they’re best friends. They’re comfortable around each other. They feed off each other and pick each other up.”

Because the Patriots realize it’s the time of their lives – again.