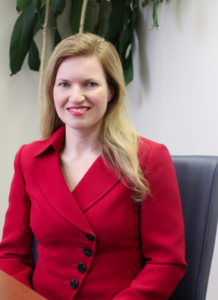 “There’s no substitute for hard work,” so goes the old adage that encourages hard work as the catalyst for success. If you’re Elizabeth Feather, there are a few other qualities that make you exceptional, too.
Throw in hard-working attorney, proven leader, confident decision maker, patient mother of two, wife to fellow attorney Gregory Feather and wise-beyond-her-years and the whole picture of Feather starts to become apparent.

Feather is the President of Caldwell & Kearns, P.C., a law firm in Harrisburg that’s been representing local clients for nearly a century. Feather became president of the firm in November, but has been an attorney with Caldwell & Kearns for close to 10 years.
In those 10 years, Feather has seen a lot of change. “It was all men when I started working there,” she says. “For me, it wasn’t that big of a deal.” Feather joined the team at Caldwell & Kearns in 2007, a few months after being let go from her previous firm for taking maternity leave.
Feather learned quickly that if she was going to succeed as an attorney in a firm controlled by men, she would have to prove herself competent, qualified and hard-working. “I definitely think I picked the right battles,” she says.

Suddenly, Feather was faced with a sink-or-swim scenario when she began tackling the work of an estate attorney who passed away unexpectedly. “It put your feet to the fire and made you have to learn it.” she adds, “There was no time to sit around and say, ‘oh, there’s no females here to hang out with.’”
By focusing on the big picture and the betterment of the firm, Feather was able to grow with the company, becoming a partner in 2013.

Feather admits that in the early years she often doubted her own abilities because of the way she was treated by other members of the firm. Previous colleagues directed her away from cases because they saw her as an attorney, but not a litigator. Doubt also came from some of her clients that initially expressed hesitation at the idea of her representing them saying she ‘wasn’t aggressive enough.’

After making partner and climbing the ranks to become president of the firm, Feather says she no longer doubts herself and prides her current group of colleagues as “female friendly.” Under Feather’s leadership, the firm has seen an open-door policy regarding the firm’s enduring future be enacted and a push to put firm and individual integrity over personal desires.

In hindsight, Feather says she doesn’t feel like she has to prove herself anymore and can focus on her work and the work product, a firm that places female attorneys on the same playing field as their male counterparts and holds them equally accountable for their own successes and failures. Thanks to Feather’s patience, work ethic and stead-fast approach, female attorneys under her don’t face the same obstacles that she once agonized over.

“…I have shared my stories and what I went through. Hopefully, they will never have to experience that,” shares Feather.

Husband Gregory Feather reflects on the previous firm she worked for and her decision not to pursue legal action, “what would the damages have been?,” he asks. Both knew it would have long-term effects that could cause her career more harm than good. In hindsight, both say they made the right decision.
Because of the sensitivity of the situations, Feather often had to keep her eye on the big picture, pick the right battles and hope that it would pay off – it did.
Feather offers advice for young lawyers, “Be true to yourself, don’t compromise. Being an attorney, reputation is everything and you have to have integrity across the board, whether you’re dealing with a client or another member of your firm… you just need to be honest and you need to have that integrity and establish that trust. …Patience. That’s something that I struggled with in the beginning when I was getting roadblocks here and there – it’s frustrating, but look at the big picture.”

Being a mom has also taught Feather some important life lessons and the overlap has helped her compartmentalize situations. “I’ve learned how to get things done.” she says. “It’s balance.”

Feather says if she had made the choice to quit when she first encountered chauvinistic attitudes, she wouldn’t be where she is today. “I just thought, it’s going to get better and I’ll get more and earn more based on what they see from me and that has happened over the years.”