Mindy Hope was not surprised when her daughter told her she wanted to become a firefighter. After all, Grace’s ambition was to become a Pennsylvania State Trooper, and it was a natural progression towards achieving her ultimate goal.

What is surprising is that Grace is not the only firefighter in the Hope family. She is joined by her younger sister Lizzie and her mom, Mindy. Together, they help make up the Rescue Fire Company #37 in Susquehanna Township. All three volunteer their time, as do the other members of the station. 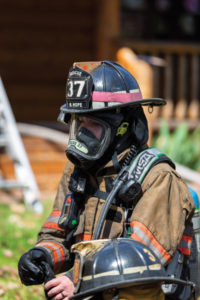 Growing up the elder Hope never thought she would have a career related to the emergency services field. But she always admired her adopted mother, a police officer, and the field she was in. Another family friend, “Grandpa” to the Hope family, had been a volunteer firefighter for 43 years in Philadelphia and she always loved hearing first-hand about his experiences.

“After moving to Susquehanna Township in 2016, I told my daughters we would wait six months and if they were still interested we would join the local fire company together,” says Hope. “In January 2017, the three of us became part of Rescue Fire Company #37.”

While Hope says Lizzie has not been able to put as many hours into firefighting as she and Grace have, “Lizzie does serve with us and is scheduled to take her Firefighter Test 1 in the fall.”  According to Hope, Lizzie has been very involved in church ministry activities and has worked at Sprin Gate Winery during her high school years. “She started taking college courses at age 15 and just recently graduated high school.”

Like her younger sister, Grace also started taking college courses while in high school. Currently, she is a student at Messiah College, majoring in English education and minoring in criminal justice. “She is looking into a career as a police officer or a state trooper,” says Hope. “Grace was awarded “Junior Firefighter of the Year” for 2018 which is awarded for a firefighter who is under 18 years for at least part of that year. She also was noted as second in training hours for 2018.

Hope, who has a Bachelor’s degree in English Education and was pursuing her Master’s degree in special education until she and her husband of 23 years adopted their eighth child, has home educated her children for 20 years. The couple have been parents to 25 children throughout the years, and served as foster parents in Ohio for five years. “We now have eight children, five of whom we privately adopted and two of whom have Down syndrome. Besides Grace and Lizzie who are our biological children, we have another adopted child—a son who is 21 years old.”

Hope, who was chosen as “Firefighter of the Year” for 2018 and first in training hours for 2018, says currently there are six women on the company roster.

According to Hope, two of her female colleagues—Randi Donoho and Cammie Butzer—have busy lives outside of fighting fires. “Randi is taking classes for her EMT certification with the goal of becoming a firefighter paramedic, and Cammie works at Mr. G’s,” she says.

“Like me, they have careers and families, but they realize the importance of being able to assist their fellow firefighters, most of them men, when on call,” says Hope.

While Rescue Fire Company #37 has four volunteer firefighters on the roster who are women, it is in the minority. Women firefighters are outnumbered by their male counterparts throughout the Commonwealth. Fire departments nationwide are also primarily made up of men. More than 90 percent of other occupations have more women workers than does firefighting, according to Women in Fire Trade. In 2017, only 4.5 percent of firefighters in the U.S. were women, according to a report recently released by the National Fire Protection Association.

“We have not faced any kind of discrimination,” says Hope. “Rescue Fire Company #37 has encouraged and trained us not only to be well prepared firefighters but as individuals and servants in the community. It is that training and support that give us confidence in those with whom we serve and in our own abilities. It is extremely rewarding to know that we serve on a team that can provide for our community in an emergency,” she says.

“There never was anyone who told us, ‘you shouldn’t be doing firefighting, you’re so small, or you’re female,’” says the elder Hope. “Our male colleagues have been nothing but encouraging,” she adds.

“We are learning new things every day and find ourselves in new challenges on a regular basis. We still have much to learn as we move forward. We do love serving as firefighters, and are thankful to our company in allowing us to serve and investing in us and our training,” she says. “Though not every call is easy, the comradery with fellow fighters and the ability to provide assistance in emergency situations are very rewarding.”

In order to become a firefighter, Hope says they had to complete the basic classes to earn their NFPA 1001 Professional Firefighter 1 National Certification. “Grace and I took four first level classes that included rescue procedures and a live burn requiring roughly 100 hours of classroom time at HACC,” she explains. “We also trained one to two days per week for scheduled trainings in the company and also met with officers and fellow firefighters to review the skills needed for new firefighters.”

Hope says at the beginning everyone starts out as probationary firefighters or “Probies” until they complete the basic skills as developed by the company and outlined in its handbook. “Once you have demonstrated the skills and passed the Professional Firefighter 1 National Certification test you can move from the probationary orange front on your helmet to a black front,” says Hope.

“From there you work on skills for other rescue specialties needed to serve on the ‘Heavy Rescue’ apparatus at the company. These skills include vehicle rescue, trench rescue, structural collapse, and confined space rescue. Once those qualifications have been met, a blue front is placed on your helmet,” says Hope.

Both mother and daughter say they’ve found a strong sense of community among their coworkers. By supporting each other and their fellow female colleagues, they are breaking any preconceived stereotypes about women firefighters.

“I would recommend firefighting to women or anyone who is willing to invest the time and effort for service,” says Hope. “We exercise and train for the abilities, strength, and endurance needed to serve with our fellow firefighters. We ask for no concessions, though we know there may be some areas we may have to work harder,” she adds. “We do not want to take a place, but endeavor to earn our spot as firefighters and as women in life overall.”