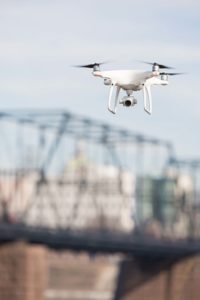 Story and Photos by Danielle Debley

“A lot of people ask me, ‘why do you do this?’ and I kind of just say, ‘why not?’ But, I think one of the main reasons I do this is to give people a different perspective,” says Matthew Ricci Dressler.

Dressler, a local drone photographer, takes to the skies with his equipment each day, capturing the beautiful sites and landmarks of Harrisburg and the surrounding area. While he has honed in his skills and expressed his creative passion through this avenue of photography, this wasn’t his original plan.

Dressler’s family owns a vineyard, Olivero’s, where he is a wine maker. When he learned about drones, his intention was to get one to be able to better map the vineyard from the air. After experimenting with the more creative side of drone photography, Dressler fell in love with it.

“It made it easier to get into drone photography because my mom was a flight attendant for US Airways in the 60s and 70s. Back then we were allowed to sometimes sit in the cockpit, or crawl around the interior of an empty plane. With that, I was exposed to aviation and I tucked that away for a while. My wife, aside from teaching at Central Dauphin East, is also a photographer and she helped me and taught me everything I know,” says Dressler. “My mom’s imagination and my now my wife’s support have planted the seeds for the growth I see today.”

Dressler began to share more of his photos online and with friends and was asked to do some work for PennLive, going on assignments when needed, to capture amazing photos of Harrisburg. Some of his work includes photos of Lady Keystone, the gold covered statue that sits atop the capitol building’s dome. His photos show the detail of her shimmering figure in a way that locals have never been able to see before.

So what does it take to fly a drone both legally and technically?

“As a drone photographer I have to know the airspace just like a pilot would. Technically, I am classified as a UAS (Unmanned Airspace) operator,” says Dressler.

To get his license, Dressler studied for almost three months preparing for the exam. Once he passed, FAA license gave him the ability to work legally for both personal and commercial drone work. The test must be taken every two years to maintain the status of being a licensed drone pilot. With many rules and laws to follow, Dressler takes great care in the safety and precautions of flying.

“I always run through a checklist before I fly. I check the batteries, propellers, check for cracks, and I also make sure that my firmware is up to date. The drone I use is a Phantom 4 Pro+. It’s a commercial drone that a hobbyist could also use. It has a one-inch sensor and shoots 4K video. I can’t fly more than 400 feet in the air without a waiver, but if it flew to its maximum height it could probably fly as high as 20,000 feet,” says Dressler.

Dressler’s long term goal is to travel and capture photos and videos, sell his work, and possibly even work for national papers. He has a website where he currently sells some of his pieces that highlight Harrisburg and the surrounding region.

“I have a lot of history here in the Harrisburg area. I really see the city as a total place; I never saw it as east and west. I think a lot of people in our city get stuck in division and get stuck in ‘yours and mine.’ With my photos I am trying to show people ‘there’s a lot to your city!’ From the inner city to the suburbs, there’s so much to see; this is our region. I want people to see it all,” says Dressler.