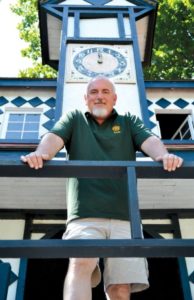 (page 1 of 2)
For 19 of the last 20 years, Sullivan has applied his background in improvisational theater and event creation to directing, producing and marketing the annual Pennsylvania Renaissance Faire at the Mount Hope Estate & Winery, Manheim. Now the new artistic director, Sullivan has seen the Renaissance Faire frow from an event to a brand with other iconic offerings – the Celtic Fling, Poe Evermore, Dickens of a Christmas. Under successive owners Chuck Romito and now Scott and Heather Bowser, Sullivan has seen the enterprise go “from being a fun faire – and we’re still a fun faire – to being an entertainment complex.”

What is the driving force behind the Renaissance Faire’s growth?

It was the need to offer more entertainment that could be all-encompassing for our audiences. A lot of people have never been to the Renaissance Faire, and they don’t know that we are an amusement park. They view us as a trip into living history, almost Williamsburg-ish. We’re really not. I tell people they’re missing so much because it is such a wonderful experience for kids and adults. It always is evolving.

But aren’t there things people expect to see every year?

Yes. We are always pushing ourselves from an artistic standpoint to grow and be different. This year’s scenario is William Shakespeare and Christopher Marlowe vying for who’s going to be the leading acting company.

There’s a lot of drama, in a fun way. We’re also putting a big emphasis on street work and interaction. We’re keeping the spectacle but really emphasizing the village. It’s not a history lesson. It’s not going to be, “In this year, we ground our wheat dragging an ox around a stone wheel.” It’s going to be more like getting some sense of what it was like during that time period.

I’m not teaching people how to survive the black plague.

Your actors won’t have boils on their necks?

Nobody’s going to have boils. There is a plight man here, played by my associate artistic director, but he is generally just goofy. He’ll be dragging a cart around with a few bodies. Some actors will definitely put people in who aren’t ready to go in, and we’ll have some fun with that.

Our joust is going to be bigger than ever, but I’m not going to sacrifice what brought us to this point for the sake of the spectacle. That’s the owner’s feeling, as well.

We want the village to be alive. I want four characters to talk to you as you walk from point A to point B. Or you encounter the farmer’s daughter who’s looking for a husband, and her aunt is out recruiting men.

You see where I’m coming from. All the shows are going to be strong and wonderful. The independent acts are great. Music, spectacle, color, pageantry, and we’re also going to really make it experiential.

“We’re not Hersheypark. But there’s enough of an audience that we can do 14,000 people a day. We draw from New Jersey, Maryland, Delaware, New York, West Virginia. It’s not just Pennsylvania”

What’s the key to successful improv?

Accept everything that comes your way, and don’t have your own agenda. The best improvisers in the world can take a suggestion and expand upon it.

We call them offers. If I said, “The sky is falling,” and you say, “No, it isn’t,” we’re done. But if you take it and say, “Yeah, it’s falling, and aliens are coming with it,” now we have the beginnings of a wonderful scene. I teach the actors to listen. I teach them not to ask questions.

If I say, “Good lady, what’s your name, and what do you do for a living?” and you say you’re a reporter, well, that’s nice, but it’s over. But if I endow you with the fact that you’re a patron of the arts and a well-to-do lady . . .

With a secret lover.

. . . with a secret lover. OK. That’s your offer. That’s even better. It’s a very embracing and warm approach. We want our guests to be the stars of everything we do. It’s all about our guests being comfortable.

Is this complex helping to make this region an entertainment draw?

In my early years here, the biggest days we ever had were about 7,000 people, and now they’ve doubled that. This place has become a big part of drawing visitors to the area, without a doubt.