“My family was always very big into Christmas, so I’ve always pulled a lot of joy personally out of that. We were the house on the street that always had the big Christmas display, so it’s a happy time for me,” says Shawn Durborow-Bowersox, the owner of Paper Moon Flowers and Events. He loves to reminisce about his childhood Christmas memories, which play a big part in his job today.

Have you ever wondered how Hershey gets to be so beautiful during the holiday season? You can tip your hat to this small business owner from Harrisburg. Durborow-Bowersox was raised in Mechanicsburg and has been a Harrisburg community member his entire life. While he didn’t always have a job in flowers, his story took him on a journey which has led him to the privilege of decorating the Hershey area for over 15 years.

“What I wanted to do was be a funeral director. When I was 15 years old, I thought if I got a job at a flower shop, I would be closer to the industry and things related to it through the flowers. I was employed at a local shop emptying trash cans three days a week.” During the short time spent at this job, Durborow-Bowersox learned a few tricks of the floral industry trade and moved on to another local shop.

“I got a job at Stephenson’s Flowers.  I worked there for a good five years,” he says.  “My direct boss, I guess, could see some kind of talent in me and frequently had me working in the funeral department. He was a very nice man who taught me a lot of things, the basics. I really liked my stint at Stephenson’s. It was a good place. I was told by a friend during this time, there was a small flower shop in Hershey looking for employees for its Christmas crew. Every year this woman hired people to help put up decorations in Hershey.”

The “woman,” Cherylann Wagner, owner of Flower Designs by Cherylann, became one of the most influential people in Shawn’s life.  His original interest in the Funeral industry changed and a new path was taken. He, along with a few other people, continued to come back and work with Cherylann year-after-year, decorating Hershey for the holidays. After working hard that first Christmas season from October to mid-January, Durborow-Bowersox was asked by Cherylann to stay at her shop full time.

“I stayed on board full time,” he says. “It was a small flower shop, only about seven employees, and through that period of time, I always remained on the Christmas Crew, but Cherylann taught me her design ways and I had my other design experience. I did weddings and parties and funerals and…I just kind of fell into flowers,” says Durborow-Bowersox. “It just stuck with me. I never got away from it.”

Cherylann and Durborow-Bowersox “took on the world” with all of the accounts, and eventually she turned a lot of the big Christmas accounts over to him. In turn, Durborow-Bowersox was able to contact vendors and clients and handle them with her help, and this truly prepared him for Cherylann’s sudden passing just three years ago.

“We were all rocked and shocked by her passing. She was my boss, she was a friend, but she was like a family member too,” he says. “Cherylann really treated us all like we were family.”

Durborow-Bowersox says the week after Cherylann passed away, the General Manager of the Hershey Lodge, Frank Gilbert, called him into his office and said, “Shawn, what are you going to be doing?” Durborow-Bowersox replied, “I don’t know Frank. I guess I’ll be looking for another job.” “And he said, ‘No, you’re going to continue to do this.  I want you to start your own business,’” explains Durborow-Bowersox.

Although hesitant and unsure at first, Durborow-Bowersox, with a great deal of help from Frank Gilbert, was able to start his own floral company, Paper Moon Flowers and Events.

“I doubted myself but Frank had faith in me,” he says. Durborow-Bowersox was contracted as the lead Florist and was also given a room to use once a week at the Hershey Lodge to work out of, and he says he had the support of many people he had worked with before, both employees and clients.

“A year into my business, it was very successful and I too hired a small staff during the holiday times. I was still working out of my car, a little PT Cruiser that I would load up with flowers and go to the Lodge once a week to assemble my creations.

It was hard. I was like a little traveling gypsy. But I knew what I was doing. People believed in me and my business,” says Durborow-Bowersox.

“The following year, two years into my business, the week before I was to start decorating for the holidays, Frank passed away unexpectedly. It was another big blow to Hershey, myself, my business, everything. But I kicked into auto pilot, and I did it. Christmas that year was beautiful!”

Now three years into his own business, Durborow-Bowersox feels as though he has a great support team. Besides the Hershey Lodge, some of his other accounts include the Hershey Country Club, Chocolate World Interior for Christmas, Hershey Story Museum Interior/Exterior, the Conservatory at Hershey Gardens, and numerous private homes in and around Harrisburg.

“Hershey has been very good to me, and I to them. “Cherylann was a very giving person, she taught me the importance of that.”

Durborow-Bowersox starts decorating for Christmas with a team of seven or eight people the week before Halloween. He says almost two months in advance, his team is going strong and working hard to prepare one of the most popular places in Central Pennsylvania for a beautiful season.

“People come from all parts of the country to see Hershey all dressed up for the holidays. Christmas in Hershey is expected to be a beautiful place inside and out,” he says.

Since July of this year, Durborow-Bowersox has been doing various prep work, getting shipments in, and gathering things to get ready for the holiday season. He says planning for each season starts even earlier, sometimes as early as March.  Durborow-Bowersox also says the short holiday season actually takes a lot of hard work and planning, which makes it a very full job. 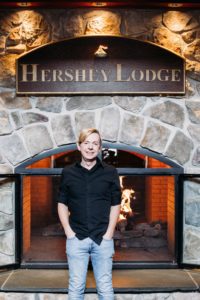 “The Lodge is probably my favorite spot in Hershey, all year ‘round,” he says, “but I love it the most at Christmas. It’s like decorating my own home, and that brings me a lot of joy, because my clients have faith in me. If I say I want to add this, or replace that, I’m allowed to do so, because they trust me.”

Durborow-Bowersox says a favorite memory of his is when he and Cherylann were at the Forebay restaurant in the Hershey Lodge, one year before he started his business.

“I was working with Cherylann. We had been working tirelessly and we were decorating these light posts out on the patio. We had always put the bows on the top of the posts near the lights, but she said, ‘Hey, why can’t we be creative and do something different?’ So she put them at the bottom of the light post which connects to a railing. And that was it. She passed away the following year, and I remember that memory. When I went to decorate the light posts the next year, I did that again, just as a little nod, and I’ve been doing it ever since. So that little memory is special to me,” says Durborow-Bowersox.

“Cherylann and Frank were really the pillars of my business and even though they’re gone, they still guide me,” he says.  “There isn’t a day that I touch a flower or do anything without them being with me. And now, I have a great team that I work with at the Lodge. My direct boss, Donna Holloway, is a fantastic person, as is the new General Manager, Jason Heath.  Everyone at the Hershey Lodge truly treats me like family.”

Not only does Durborow-Bowersox have the privilege of being the man behind the spectacular holiday decorations at Hershey, but he also handles parties, weddings, funerals and other jobs through his small business. Orders can be placed through his Facebook page, @papermoonflowersandevents.