This time of year evokes memories of Christmases long ago when a familiar scene in the home comprised that of a decorated conifer under which circled a model train. However, for some, that “season” never ended. Model railroading has become a year-round hobby enjoyed by millions of Americans.

One group dedicated to this purpose is the Keystone Model Railroad Historical Society (KMRHS), headquartered in an early 20th-Century trolley station at the west end of Mechanicsburg.

“We spent several years gutting and renovating the building,” says Bob Sheriff of the effort to provide a suitable interior for the club’s HO gauge layout.

Sheriff, 69, is the KMHRS treasurer and, typical of model railroaders, was introduced to the avocation as a child. To several questions, the Enola man responds, “Currently, we have 28 adult members and eight youngsters. Our business meetings, slated for the first Monday of each month, are conducted when necessary. The second Monday is devoted to operating the layout, and the last two are reserved for working on projects.”

The KMRHS layout is an amalgam of mid-20th-Century fictional Pennsylvania landscapes.

“This is a bridge route between New York and Chicago, set in the 1950s,” says David Calhoun of the layout’s rationale.

The 71-year-old Carlisle resident came by his interest in the hobby by working on the real deal as a young man.

“Including me, seven members of my family were employees of the Nickle Plate Road,” he says.

Although color blind to green, Calhoun is the KMRHS primary scenery specialist. 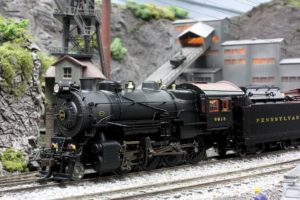 “Coloring along real railroads is not perfect,” he says. “And other members offer suggestions if I have questions in that regard.”

Explains Calhoun, “A product is available in which dyed fiber particles are electrostatically charged and, when applied to a surface, stand up like real grass.”

Aaron Heaney, at 29, is one of the younger members of the KMRHS. He participates in various facets of the club’s operation. But his youth and flexibility have also earned him the task of crawling through the layout’s supporting bench work to address issues there.

“I was introduced to model trains through a display at the Schuylkill Mall in Frackville when I was just 6 years old,” he recalls. “My mother promised to purchase a train set for me when I reached 13, and she was good to her word. Since then, I’ve been active in the hobby.”

The general public knows the KMRHS best through its holiday season exhibition in the barn at the Fort Hunter Museum. Member Dennis Shollenberger of Camp Hill supervises its assembly and operation.

“The layout features an amusement park with animation,” he says. “That’s an interest of mine. Animation can be anything from lighted structures to people and animals in motion.”

Shollenberger constructed an operating incline at the club’s Mechanicsburg site.

The KMRHS is run like an actual railroad, serving passengers, a coal company, steel mill and other industries. On the second-floor mezzanine, a large board displays the layout schematic from which a dispatcher directs trains.

Sitting by the main passenger station is Gary Yanko. He waits to pick up the white phone for orders from the dispatcher.

“Ninety percent of the trains pass through the main station, so I’m busy on operating nights,” says the 69-year-old New Cumberland man. “I received my first model train at age 6. My grandfather worked for the Pennsy, so my interest in trains was natural.”

Visit keystonemidland.org/events for dates of the Fort Hunter display as well as those for open house at KMRHS, 833 W. Trindle Road, Mechanicsburg.