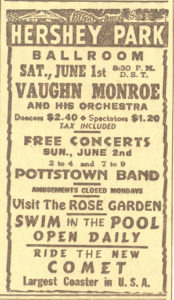 Memories of the Hershey Park Ballroom

The moonlight flashed off the pearl necklace of 20-year-old Kathy Lewis as she rushed to rejoin her friends. The air was warm and electric; a summer Saturday night. Kathy had stayed in the car an extra 10 seconds, adding the final touch to her outfit. After all, what young woman would go dancing without the proper accessories?

As the girls approached the Hershey Park Ballroom, they heard the smooth sounds of string and brass mingling in the distance. Kathy’s heart skipped. She straightened her necklace and smiled in anticipation of the night ahead.

All the girls wore them. Pearls. Party dresses. High heels. It’s not that it was required. It was just right. That’s how they dressed. The boys wore jackets and ties. They danced elegantly to the music of Glenn Miller, Harry James, the Dorsey Brothers – all the big bands of the time.

The Hershey Park Ballroom, first called the Dance Hall, opened circa 1920, when Hershey was in its earliest stages of growth and Americans were enjoying their first automobiles, drop-waist dresses and Babe Ruth.

In 1930, the ballroom received national attention when Rudy Vallee and his Connecticut Yankees – deemed “Sensation of the Year” – drew a crowd that packed the 22,900-square-foot dance floor. This event put the Hershey Park Ballroom on the map for the country’s best-known bands and orchestras. It became a destination point for the most acclaimed performers of the day.

War affected the ballroom when, in 1943, the U.S. Price Administration announced that automobiles could not be driven to “places of amusement” due to the rationing of gasoline.

Between 1933 and 1942, 176 different groups played in the ballroom and attracted regular crowds of 5,000 or more. Tickets ranged from $.50 to $1.50 and events were held every Wednesday and Saturday evenings.

“This was an amazing venue, if you think about it,” stated Lewis, who worked as a Hershey factory tour guide during her teens and was instrumental in forming the Hershey-Derry Township Historical Society. “On a given night, the ballroom attracted more than the entire population of our town. That’s really something and shows the foresight of Milton Hershey. It brought many people into our community.”

War affected the ballroom when, in 1943, the U.S. Price Administration announced that automobiles could not be driven to “places of amusement” due to the rationing of gasoline. The rationing was soon lifted, and the ballroom opened again for business that fall.

After the war, the big-band craze continued. In late August of 1947, nearly 65 years ago, Vaughn Monroe’s famous band drew one of the largest crowds in the history of the Hershey Park Ballroom. Over 6,000 people danced to Racing With the Moon and other sweet melodies from what eventually became one of the biggest names in big-band history.

DID YOU KNOW?
At age 11, Kathy Lewis met Betty Grable and Harry James – the two biggest stars of the time – at the Hershey Park Ballroom. Her friend’s grandmother lived in an apartment above the Ballroom and invited the girls to accompany her to the landing adjacent to her apartment where the performers frequently sat.
Kathy said, “hello,” to the couple and got their autograph, but never actually saw them. Kathy was too shy to look up.

As styles, social views and musical tastes shifted in the late 1950s, the big-band era began to fade.

In 1957, the ballroom was remodeled in hopes of reviving the ballroom dance movement in Hershey. The center portion of the roof was removed, leaving the dance floor open to the night sky, thus resulting in its third name: the Starlight Ballroom.

Hank Fasnacht (1921 – 2001) worked as chief box office clerk at Hershey’s Starlight Ballroom. In an interview recorded with the H-DTHS, Fasnacht shared his memories of the night Guy Lombardo visited the Starlight Ballroom in 1953 for the celebration of Hershey’s 50th anniversary. Over 7,000 people flooded the dance floor.

“Mr. Sollenberger [park manager] came into the box office and said, ‘Hank, we may have to stop selling tickets…I can hear the floor creaking.’” Sollenberg and the constable crept underneath the ballroom to examine the strained floor boards. “They came up, and he said, ‘I think the floor will hold up, keep selling tickets!’”

The floor indeed held up and revenue poured in. On big nights like this, Fasnacht ran out of room in the little cash box he used. With nowhere to put the cash and thousands of patrons flocking in, he just dropped the bills at his feet.

“[One evening] I had a cigarette hanging in my mouth, and was ankle deep in greenbacks. I still remember Mr. Bartels [Ballroom management] saying, ‘Hank, for God’s sake, don’t drop that cigarette on the floor!”

By 1964, the ballroom hosted only 16 dances. By the late 1960s, the venue was nearly abandoned. Saturday night dances in the Dance Hall, Hershey Park Ballroom and the Starlight Ballroom were over – an era ended.

The ballroom came down in 1977.  But its majesty will be resurrected for one evening this fall.

Lauren Grubb and the Preservation Committee of the Hershey-Derry Township Historical Society will make this happen for the society’s 16th annual Preservation Dinner and fundraising event Racing with the Moon Saturday, September 22nd from 5:30 p.m. to 10 p.m. in Hotel Hershey’s Terrace Ballroom.

“It is our intent to help attendees feel as if they are actually experiencing the Hershey Park Ballroom on a Saturday night in 1947, with all the sights and sounds of the post-war big-band era,” stated Grubb, Preservation Committee chair. “We will incorporate large-scale photos, life-size displays and music from the Hershey Symphony Big Band to bring the memory of the Ballroom to life again. It should be a very exciting and nostalgic evening and raise needed funds for programs and services that benefit the community.”

Sixty years have past since Kathy Lewis frequented the Hershey Park Ballroom. She has exchanged her heels for sensible shoes, her ponytail for silver hair. But her beautiful smile remains. On September 22, she will again don her string of pearls and best party dress, remembering for one night the days gone by. And she will look as lovely as ever.