While many come to pray, light candles, and attend mass, few know the history of the Cathedral of St. Patrick, an impressive Baroque Revival style Catholic church located on State Street in downtown Harrisburg.

Catholicism came to Central Pennsylvania before the American Revolutionary War. While German Jesuits established two churches in Lancaster during the mid-1700s, there was no Catholic church in Harrisburg. By 1806, a small Catholic mission could be found in Harrisburg. In 1813, property in Allison Hill was bought and a chapel was built on the site. As Harrisburg began to develop, Irish immigrants arrived in town when a vast system of canals, railroads, and turnpikes along the Susquehanna River needed workers. The influx of these Irish laborers influenced the building of St. Patrick’s church closer to the riverfront. In 1824, Fr. Patrick Leary purchased the present site on State Street, and in 1826 the cornerstone was laid.

The original church was constructed for the princely sum of $6,500. During the period from 1826 to 1846, a rectory was built, a school for girls on Pine Street was staffed by the Sisters of Charity, and new altars and an organ were installed.

The Diocese of Harrisburg was established by Pope Pius IX on March 3, 1868 and St. Patrick’s was chosen as the name for the cathedral of the new diocese. In 1902, Bishop John W. Shanahan proposed that a permanent cathedral be built. A committee was formed and members accepted the plans of Philadelphia architect George I. Lovatt, Sr. Ground was broken for the new church in 1904 and it was completed in March 1, 1907. Although the cathedral was officially dedicated on May 14, 1907, liturgies began earlier in the year. The Ancient Orders of Hibernians gathered at the new cathedral at 7 a.m. for a St. Patrick’s Day Mass, which fell on a Sunday that year. About 100 clerics attended the official dedication, including Archbishop P.J. Ryan of Philadelphia. He also donated the exterior statue of St. Patrick that is mounted over the entrance of the church.

St. Patrick’s Cathedral was built for $250,000 and was designed in the Baroque Revival style with Renaissance Revival influences and capped with a classically influenced dome. The exterior of the building is covered in granite from North Carolina. The interior featured wainscoting covered in oriental marble topped with Connemara marble. The main nave is flanked by granite columns that support a vaulted ceiling. There are forty-four stained glass windows in the nave that were imported from Munich, Germany. The Ancient Orders of Hibernians paid the $1,8000 for the transept window of St. Patrick, holding a shamrock to explain the Trinity to the royal court at Tara.

In an article dealing with the church’s architecture after the dedication, the Harrisburg Telegraph described the stain glass window of St. Patrick as “The Apostle of Ireland is a splendid figure… arrayed in full pontifical, even to the gloves.”

Church history states that the original altar was patterned after the Bernini altar found in the Chapel of the Blessed Sacrament in St. Peter’s Basilica, Rome. The original pulpit featured carved figures that were patterned after a fresco found in the Roman Catacombs. It showed the four evangelists with the Lamb of God standing on the mystic mount.

The original organ was installed in the choir loft of the cathedral by the Austin Organ Company of Hartford, Connecticut, in 1906. In 1951, the Gundling Organ Company of Lancaster, Pennsylvania, rebuilt and doubled the size of the organ. In the two chambers, housed on each side of the loft, the electronically controlled organ contains more than 2,600 pipes. In 1988, a new console with solid state electronics was installed. After lightning damaged the organ in 2005, the console was rebuilt and redesigned by R.J. Brunner and Company of Silver Spring, Pennsylvania. 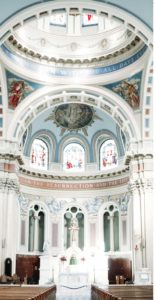 The cathedral has undergone a couple of major renovations in its history. In 1949-1950, the altar was simplified and the chancel was renovated to provide more space. The interior of the church was frescoed including the four Western Fathers of the Church, Jerome, Augustine of Hippo, Gregory the Great and Ambrose, which embellish the spherical triangles that serve as an arch beneath the dome. An inscription was added to the lower part of the dome which reads: “Behold, I am with you all days, even to the consummation of the world.” The shrines of the Blessed Virgin Mary and St. Joseph were given light and dark backdrops. The Stations of the Cross were created in simulated bronze with gold highlights and were recessed in the wall. The chancel was modified in 1976. A new free-standing altar was created from the high altar and located closer to the congregation. The tabernacle was placed at a new Altar of Repose, a new pulpit was installed, and the bishop’s chair was relocated to a more central position.

St. Patrick’s Cathedral is listed on the National Register of Historic Places as a contributing property in the Harrisburg Historic District. St. Patrick’s Cathedral still stands much as it did when it was first built. As an active parish, it is a place of baptisms, weddings and daily masses, pastoring to its regular congregants, as well as visitors from all over looking for a place to worship.

From the time of its founding, the Cathedral of St. Patrick has stood as a cornerstone of Harrisburg’s Irish-Catholic community. All these years later, it has become a landmark, but it is also much more than that. A breathtaking piece of living history in the middle of downtown Harrisburg, it is a beacon of worship to the faithful throughout the city it has served for more than 195 years.