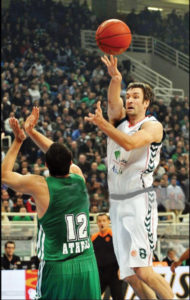 What a long, fascinating and sometimes strange trip it’s
been. But no matter where he’s gone or what he’s done, it’s always been about putting a leather sphere through a round hoop for Andy Panko.

Panko is quite possibly the finest basketball player from Harrisburg that you’ve never heard of. But it would seem that flying under the radar has always served him well.

Without much fanfare, Panko recently retired from an amazing 20-year professional basketball career. Abruptly. He just up and walked away.

The reason you may have never heard a lot about Panko, or that you may have lost track of him, is because his pro career unfolded outside of the NBA – and outside of this country. But that only makes Panko’s story even more intriguing, not less.

“I had a 20-year career,” said Panko. “I know guys who were better than me who had five- or six-year careers. You need to be fortunate. You need to have some luck. But I’m also a firm believer that you’ve got to live right. I give my wife a lot of the credit for being there with me. She definitely kept me grounded. She’s a big part of what I was able to accomplish.”

“The people who see me in the area now remind me of that (the uniqueness of his career),” continued Panko. “You miss the competition. You miss the camaraderie. But I don’t miss the travel. I don’t miss living out of a suit case. I get it. Twenty-some years is a long time. But I’m happy here.”

At age 41, Panko is officially retired from playing the game. And the former Bishop McDevitt and Lebanon Valley College star did it on his terms, not unlike his playing career itself.

Panko played 20 seasons of basketball, for 13 different professional teams in multiple leagues, on three different continents. On three separate occasions, the 6 ft., 9 in., small/power forward was named the most valuable player of the leagues he was competing in.

Panko was the top scorer in the Spanish League three times. Not bad for an overachieving, former Division Three college kid from little Harrisburg.

“For me, when I think about it, the thing I’m most content with is my 15 years in Spain,” says Panko, who now runs Panko Performance in Palmyra. “People don’t realize how hard it is to get into the Spanish League and stay there. The league is allowed 36 Americans, two per team. That’s the thing I’m most proud of. You’ve got to be a good basketball player, because the league is so good overall.”

He says, “There are guys in the NBA who have played a long time. But being an American overseas is different. I played 20 years at the highest level, and 19 of those were overseas. For me, it’s a career to be proud of.”

Physically, Panko possessed a rare combination of size, quickness and shooting ability that made him a threat to score from anywhere on the floor. But what his game was really predicated on was a certain cerebral approach, an unrelenting drive to succeed and a true passion for the game.

Perhaps the best way to characterize the level on which Panko competed was to place it somewhere between Division One college ball and the NBA.

“I was a fan. I played basketball, but I was always a fan,” says Panko. “Growing up in high school, in college, even in the pros, I was a fan. I followed the game globally. You need to know your competition. I was a student of the game. Overseas, it’s more mental than physical. You’ve got to understand who you’re going up against. I had to pay my dues. I always had to work harder than most kids. I was never content with scoring 20 points and the team winning, especially if the guy I was guarding scored 22.

“It’s very good basketball,” adds Panko. “Those countries only take big Division One players or former NBA players. If you’re not in the NBA, you’re playing in Spain or Italy. It’s no B.S. basketball. It’s hard. It’s cut-throat. There are a lot of guys who want to be in your spot.”

At Lebanon Valley College in the late 1990s, Panko’s talents seemed to transcend those of other players at the Division Three level and earned him National Player-of-the-Year honors twice. Undrafted out of college, he had a couple of NBA try-outs as a free agent, but never stuck with an NBA club.

Undeterred, Panko refused to view it as the loss of a dream, but rather as his pursuit taking a different course.

“Oh yeah, sure. I would’ve laughed at it,” says Panko, when asked how he would’ve reacted if he had been told he was going to have a lengthy professional career, during his senior year in college. “I would’ve hoped to play one year. Coming from Division Three, it’s hard to make the pros. Getting paid to play basketball is a pretty cool thing. I guess it became surreal. I had NBA scouts coming to (college) games, so I knew I had an opportunity to play somewhere. But somewhere back then was the CBA (Continental Basketball Association). I never dreamt I’d have an opportunity to play high-level basketball in Spain.

“It’s funny how things turned out,” Panko adds. “Coming from Division Three, I was one of the last cuts with the Lakers. In my first year in the IBL (International Basketball League), I was one of 18 guys, but I was injured, and they couldn’t cut me because I was hurt. They could’ve cut me like that, and I would’ve been done. I didn’t have a back-up plan.”

Panko’s final season of professional basketball was 2017-18, with Fuerza Regia of Mexico’s LNBP.

He’s still processing this retirement gig and he says it’s still all new to him. But when Panko does allow himself to look back on his playing days, it is with a sense of pride, and without regret.

“I am 99 percent retired,” says Panko, who resides in Hershey. “I started thinking about my family. When I was in Europe, my family would come with me. But my kids were getting older. It was important for them to make new friends. It had nothing to do with my basketball ability. Physically, I’m fine. But I’ve been very fortunate.

“People are inquisitive. They want to talk about it,” says Panko. “I prefer to leave it in my past. I’m more than just a basketball player. There are things I’m more interested in than just basketball. I’m ready for the next stage. There are other things I want to do. Whether that takes me into coaching or scouting, or takes me away from anything related to basketball. But I know what I’ve done. I know what I’ve accomplished.”

A journey that could’ve never been scripted.