The instructor bubbled with enthusiasm. “Are you guys ready?”

“OK, like three people are ready,” he said with faux despondency. The group’s second try was stronger. The music started, and we put our new dance steps to music.

Adventure Chick and her trusty sidekick, Adventure Sis – aka my younger sister, Sharyn McCormick – delved into the smooth and sultry world of salsa dance. Neither of us is a complete flatfoot when it comes to dance. We can shake it up on a club floor, and years of theater productions taught us a pretty mean box step.

But the brand of dance that involves learning specific steps and combining them as the groove moves you – that’s new to us. It was Sharyn’s friend and salsa aficionado, Julie Matthews, who coaxed us into this outing with the Harrisburg Salsa & Rueda Casino Meetup. An old boyfriend introduced Julie to the art of salsa dancing, and today, she glides on the floor as effortlessly as a swan floats on a pond.

Clearly, this is a dance that devotees love to share – companionable and social, intricate and smooth. At the meetup in a loft of Rookie’s Craft Bar in Harrisburg, we were welcomed with open arms. Our teacher tonight was Martin Armas, with his girlfriend Lucy Martin. With her Puerto-Rican heritage, she has danced salsa since childhood, often at family functions.

“In our culture, that’s how we grew up,” she said.

He’s a native of Mexico (the name’s pronounced “Mar-TEEN”) who has been dancing 14 years, originally driving from Harrisburg to Baltimore twice a week for lessons.

This meetup was born around 2008 when the pair decided it was time to convene Harrisburg-area salsa lovers, creating a casual space for fun and learning.

The salsa community “turns into another family,” said Lucy. “Everybody gets to know each other really well.”

Salsa dancing, I learned, is a mélange of styles and influences with its own rhythms and rules. It has gone by other names over the years – guaracha, mambo. At heart, salsa is a dance of Caribbean nations with African influences. The music is the unifying theme, Martin said.

“The music is going to tell you what to do, and when to do it,” he advised. “You match footwork with the music, and magic happens.” 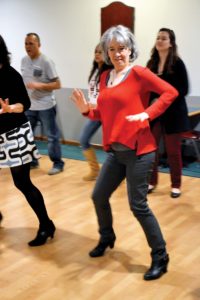 That is, once you know what you’re doing. This is not, as some people think, “a bunch of shimmies and turns,” Martin said. Strict rules govern the process.

It was time to salsa.

“I need beer,” I said, taking a last sip from my pint as Martin summoned us to the dance floor.

I thanked her – very encouraging.

Ten or so people, men and women, clumped on the dance floor.

“The new people in the front,” Martin prompted, “so we can pick on you.”

Drat, nowhere to hide. Sharyn and I took our spots front and center. Martin started by explaining the music. Eight counts, he said, but “in salsa, we’re only going to dance six out of those eight. One, two, three. The four is a pause. Five, six, seven. The eight is another pause.”

I got the music down. We were learning the salsa style known as “On 1,” in which the count determines each step – hence, the importance of counting. Martin played a sample of music, and we were chanting along. “One, two three.” Pause. “Five, six, seven.” Pause. “Uno, dos, tres.” Pause. “Cinco, seis, siete.” Pause.

“But that’s the fun part,” someone wailed.

“There are a lot of rules,” Martin assured us, “but the better you get, the more rules you can break.”

I know all about that, too – I’ve been doing it in my writing career for eons.

Then came the cumbia step, a kind of pivot and return to center. Then a side cross step. Doing each one as a standalone, no problem. In practice, to music, combined with other steps – that cumbia had me tripping over my feet.

That is, until we partnered up. Remember when boys and girls danced in pairs? In salsa, it still lives. This group balanced evenly, gender-wise. Lucy informed the ladies that all the steps we’d just been taught actually start on the other foot, as we’d be dancing in opposition to the guys. We had learned the men’s version because, Martin admitted with a conspiratorial wink to the men, “The ladies are smarter than the guys.” Just easier for women to adapt.

“The whole purpose of dancing with a partner is two people dancing as one,” said Martin, who, by the way, was an excellent instructor. “It’s going to be a mirror effect. When the guys go forward, the ladies go backward.” 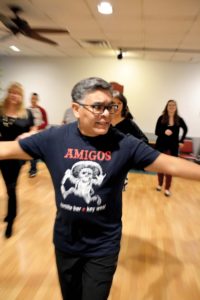 He regretted to inform the women that, on the dance floor, “Guys are the freakin’ boss.”

To the men, he said, “Be nice to her. Treat her with respect.”

My first partner was Sal, a relative newbie but not a complete neophyte like me. With partner as mirror, I suddenly understood the dynamic – forward and back, and side to side. I even grasped the transition to cumbia when he dropped my right hand, and we each pivoted to the outside.

We were in lines, men facing women.

And the men would move to the next lady in time to the music. Each partner brought his own style and strengths to the process, offering tips and explaining how a squeeze or a lift of the hand would telegraph the next step. One early partner, Larry, suggested that I stop doing the bunny hop and, instead, ease my foot along the floor in a gentle slide.

Sharyn later confirmed that my moves at that point were, indeed, channeling an Irish jig. Had to put my brain in Caribbean mode. Soft breezes. Gentle waves. No need to warm up the body because the air was already hot enough. Just glide.

Now that I thought I had it down, we learned two new steps – a cross and a turn. The cross made sense. The guy steps out of the way and gently guides the woman forward as they switch places. I was suddenly doing all the same steps but facing the other direction. Forgot right and left for a moment there.

And as for that turn, start on the five count and “step, pivot, turn.” Cinco, seis, siete. In theory, at least. We weren’t even doing a fast salsa, Martin had told us, but at this point, my feet weren’t stepping, pivoting and turning in time to the music. My goal became nothing more than spinning and landing back at one to face my partner.

Beside me, Sharyn had been nailing each step, but at the end of her turns, she wobbled like a dashboard hula dancer.

Back on the dance floor, all this stepping and turning was working up a sweat as well as a thirst. We welcomed the occasional beer break, but each time, Martin would efficiently herd the group into formation. By the final set, we were blending all our newly learned steps in combinations, except that I would get so wrapped up in each current step that I failed – pretty much every time – to anticipate or catch some signal from my partner to change moves.

Was I supposed to cumbia there? Sorry about stepping on your toes.

But this was a no-judgment zone, and no actual toes were broken in the making of this story. When the hour’s lesson had flown by, I realized that we had achieved the evening’s primary goal, as explained by Martin – we had fun. Our friend Julie, the one who introduced us to this companionable bunch, said we’d been awesome. 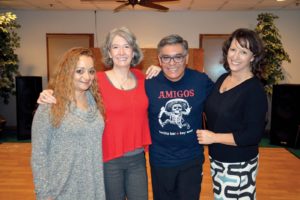 Before the dancing started, I met veteran salsa dancer Dolores Becker. When we first hit the floor, she stood beside me and promised moral support. She showed up to learn salsa dance about four years ago, she told me, and has been coming back ever since.

“I love the learning. I love the people, and I love the dance,” she said. “What more could you ask for?”