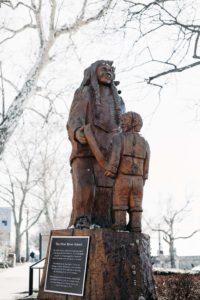 There is something universally interesting and intriguing about this concept of restoring, refurbishing and remodeling. And there are few life forms more beautiful and more reuse worthy than trees.

It is a concept that Jeffrey Tinsman has not only fostered, but also embraced. For you see, Tinsman is a man with a plan.

Tinsman is the driving force behind a local beautification idea that turns old trees earmarked for termination into artistic carvings. In fact, if the Harrisburg native would have his way, stumps would no longer exist in the city—only wooden sculptures depicting objects meaningful to the region.

“They’re going to be spectacular pieces of art,” continued Tinsman. “It’s horrible to take a beautiful tree down. But we’re going to salvage it. We believe we can save the city time and money, and enhance the grounds.”

It’s been nearly ten years since Tinsman first commissioned York chainsaw carver Brad Heilman to turn a capped tree on the east side of the Market Street walking bridge, right along Front Street, into a Susquehannock Native-American presenting a canoe to a boy.

Now, Tinsman has designs on two more similar projects, one a few yards north of the Susquehannock Native-American statue, along Front Street, and another on City Island, a baseball throw away from FNB Field. All in the name of raising funds for the Harrisburg River Boat Society’s newest vessel ‘Ogontz’ and the Susquehanna River School.

“The original tree was my idea,” said Tinsman. “That tree came open and I have a creative mind. I thought to myself, ‘I’m going to take that tree and do something with it.’ We thought it should be that because the Susquehannock Indians lived in this region. They occupied the land here. We thought it was appropriate and a good subject matter.”

“There were 40 trees that were capped by the city,” added Tinsman. “It was like, ‘Look at all those gorgeous trees.’  I was coming down River Front Park and I saw all these trees, and I thought it would be a shame to knock them down. And we needed money for the board. We wanted to get that boat in the water. It was a timing issue.”

“I call it ‘extending the life of a tree,’” said Heilman. “If I can do something for people, it makes me feel good. I guarantee you, with these projects, there’s going to be a lot of people getting their pictures taken with them.”

With the blessing of Harrisburg Mayor Eric Papenfuse, and the help of Heilman’s creative chain saw, Tinsman plans to turn a second capped tree along Front Street into a carving depicting bass which are native to the Susquehanna River. The goal is to have the project completed in time for the annual Artsfest of Greater Harrisburg, May 25-26.

The second project calls for a 40-foot bat, a 20-foot glove and a 15-foot baseball to be collectively carved from a tree outside of the City Island home of the Harrisburg Senators. It is planned in conjunction with the Labor Day celebration of the Kipona Festival, September 1-3.

Tinsman hopes to attract sponsorships for both proposed carvings.

“This is a busy area. There’s a lot of traffic,” said Tinsman, of the place where Front Street and the Market Street walking bridge intersects. “I hope people see the value. The baseball carving was a no-brainer. The stadium is there. It’s just going to complement the area for baseball fans. You’ll be able to see it from the baseball stadium.

“You’ve got to get involved,” Tinsman continued. “You’ve got to embrace your community and make a difference. That’s why you join boards. But this should be fun.”

“People come up with an idea and I come up with a picture,” said Heilman of an artistic process that involves multiple chain saws, a burning torch and a coating seal. “You figure out what you want to do, put in your mind and draw with a chain saw. But it’s physical. You’re holding a chain saw the whole time.”

The “Ogont”’ can be characterized as a little sister vessel to the famous ‘Pride of the Susquehanna’ riverboat. Within its planned use, the “Ogontz” will directly serve and support The Susquehanna River School, a floating educational class room which focuses on the history, natural wonders and eco-system associated with the largest navigate-able river in the world.

“We’re just sending a message to people to be good stewards of the river,” said Tinsman. “We’re just trying to connect the dots. Money is tight everywhere. I don’t know how difficult this is going to be. But at the end of day, these carvings are going to be focal points. It’s going to nice advertising for the sponsors.

People tell me I’m artistic. I’m just grateful I can carve,” said Heilman. “I like doing them. I like helping the Harrisburg River Boat Society out. It’ll be a challenge. But I love challenges.”

And haven’t rivers and trees always enjoyed a symbiotic relationship?