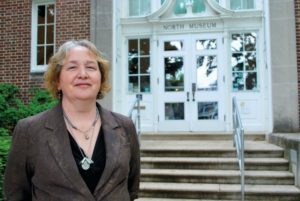 It’s a typical day at North Museum of Natural History and Science – typical, as in, very busy. In the Live Animal Room, third graders gingerly touch a bull python. In the Cabinet Museum, a dad lifts his daughter to see a starfish display. The Hall of the Cosmos’ “in-use” light is on. Mennonite teens scatter among the bugs, dinosaurs and stuffed owls.

On this bustling day, Executive Director Margaret M. Marino – call her Margie – sees her museum doing its job: assessing and meeting the needs of the community.

Since 1953, the North Museum has occupied a corner on the campus of Franklin and Marshall College, its founding organization.

It’s an independent nonprofit today, but is still supported generously through F&M’s ownership and maintenance of the 26,000-square-foot building.

Marino joined the North Museum in 2004, capping a career that started in art but crisscrossed into natural-history-museum administration.

That career trajectory mirrors the mission of the North Museum to strip away the mysteries of science and instill scientific literacy in children, so that even those who won’t be scientists build a healthy dose of critical-thinking skills.

The first time she saw the North Museum, Marino says she “fell in love with the place.” She loved the intimacy – staffers can’t escape from museum-goers because their offices open into a hallway of exhibits – and its community status.