Jenna Carls would not be the first artisan who, after obtaining an education and employment in another vocation, decided to return to an earlier interest and make it her profession.

“I started knitting when I was 9 years old,” says the Illinois native, “and continued to do so through high school and college. I made wool hats and scarves, mostly for myself and my friends. Living in Chicago, those garments were always useful.”
It was during that time she began the practice of dying her own wool yarn, because the commercially available product was so expensive.

While pursuing her knitting hobby, Carls earned a bachelor’s degree in American studies and sociology from Northwestern University and then added a master’s in marketing and finance. The latter served to move her east, where she accepted a position with the Hershey Corporation in 2012.

“After I moved out here, I began to take instruction in weaving from Tom Knisely at the Mannings Handweaving School in East Berlin,” says Carls. “When the Millworks opened in April of 2015, I rented one of the studios and decided to quit my job with Hershey and go full-time as a fiber artist.” 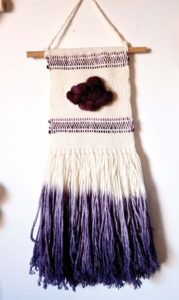 She shares the space with painter and sculptor Mary Olin Geiger.
“I was introduced to fibers through the functional route, making those hats and scarves,” says Carls. “That was a jumping-off point for me. I’ve always been kind of a math geek, so the pieces that I do now, which are mostly wall hangings, are planned first on graph paper.”

Her current wall hangings are inspired by the forms and colors of landscapes, particularly sky and clouds.
“The palette with which I’m working at present consists mostly of grays and blues,” she says.

The reader can see Carls’ efforts this month at the Millworks. She is the featured artist for November in the establishment’s gallery. For hours, click the “Visit Us” link on millworksharrisburg.com. Carls also offers instruction at the Millworks. Interested readers may visit the website and go to the “Events” link for details.

When asked about a future direction, Carls confesses the desire to try different ideas, concepts and mediums.
“I’ve had people talk to me about the weaving traditions of their family ancestors,” she says. “And it started me thinking about combining the old and the new. So, I’ve been antiquing and going to yard sales, looking for farm implements and other tools to use as grids on which weavings can be presented.”

As an example, Carls points to a wooden-handled rip saw leaning against a piece of furniture in her studio.

Striking out on one’s own in the fine arts business is risky, but Carls says “so far, so good.” Her marketing skills are handy in that regard. Most of her work is acquired by online clients.
“People underestimate how big a market there is for fibers,” she says. “About 30 percent of women under the age of 65 either knit or want to learn how to knit.”

In addition to her November show at the Millworks, the Harrisburg resident is also participating in the Delmarva Fiber Expo in Ocean City, Md. Carls is on Facebook at facebook.com/jcarls.