Like most individuals who are professional artists, Cheryl Piperberg has been immersed in the creative process since childhood. Marking her 65th birthday last month and decades removed from a formal education at the renowned Moore College of Art in Philadelphia, the Lancaster County woman continues to explore her vocation.

The Montessori Academy of Lancaster is Piperberg’s most recent port of call.

“I guess you could say that I’m a guest instructor, rather than an artist-in-residence,” she says. “Generally, the Montessori school concept is not one that focuses on art as a large part of the curriculum. But the woman who heads the Montessori Academy, Karen Rubenstein, sees the value of the art process for children, and I’ve been given the opportunity to make a contribution there.”

Piperberg earned a Bachelor of Fine Arts in illustration at Moore. Her introduction to the world of commercial art began as a paste-up artist at a Philadelphia insurance agency. And it was long before the advent of graphic software programs.

“Wax was used to affix images and text to a paste-up board. Mine were often crooked. My supervisor could spot that from across the room,” she laughs.

Thereafter, Piperberg was employed by the Pennsylvania School for the Deaf in Germantown, designing educational materials. Her next move was to Boston, where she worked as a freelance illustrator.

In 1987, two years before returning to the capital area, the artist started a poster company while in Boston.

“I named it Carrot Prints with a tag line of…nourishing images for children,” she says.

The business thrived, due in some measure to her association with Bruce McGaw Graphics, a leading publisher and distributor of posters in the United States and internationally.

“It’s been a slow fade for about 10 years,” says Piperberg of Carrot Prints. But it has not been without heartening moments. 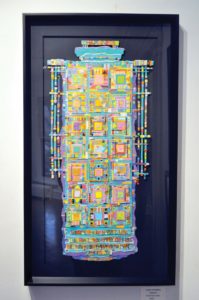 “A couple in Italy, visiting their son in the hospital, was bolstered by viewing a Baa Baa Black Sheep poster on the wall in his room,” she says. “They ordered the poster for him because he didn’t want to leave it when he went home.”

Her Moore education planted in Piperberg a deep reverence for the two-dimensional side of visual arts. Her imagery, produced chiefly with acrylics, colored pencil and Pantone colored paper, socks the viewer with intense hues.

“Pantone isn’t produced anymore,” she laments. “I quickly acquired a store’s supply when they were getting rid of it.”

The joyful colors, complexity and subtle energy of her two-dimensional pieces reflect, in part, her sentiment that the world, with so much tragedy and misery, retains beauty that needs to be appreciated.

Piperberg will tell you that all of her work contains decorative elements. Perhaps it is most evident in a recent foray into the crafts realm. She has produced a series of wall hangings and soft dolls. Regarding the latter, Piperberg explains, “I purchase 100-percent wool sweaters from places like Goodwill and wash them in hot water. Of course, they shrink considerably. By sewing on pieces and patches of cloth and other materials, I complete the forms.”

There is an art thread in Piperberg’s family. She is the daughter of Betty and Irving Silverman who owned and managed The Custom Frame Shoppe for 40 years. Piperberg’s son, Jason, graduated from the University of the Arts in Philadelphia and is an illustrator.

Of her efforts, the artist declares, “I want them to inspire people to remember that the earth can be such a paradise; and to not be separated from others. And when they walk by my work, I hope that it will make them smile.”

This article appears in the July 2016 issue of Harrisburg Magazine