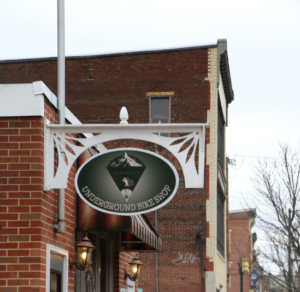 “I never really intended it to happen, like, at all,” says Ian Morrison. He sits on a leather chair in a living room-like set up in the front of his bike shop. “My friends who,  helped get the business off the ground and stuff like that with the purchase of tools were like, ‘Hey, you should do shows here!’”

About a year ago, Morrison opened The Underground Bike Shop off the shoulder of Midtown Harrisburg. The shop specializes in quality bicycle retail and repair, but also operates as a pay-as-you-can venue for local music after the shop closes. On booked evenings, Morrison pushes the living room aside to create an open space for bands to play among racks of bicycles.

Before opening his own business, Morrison worked for other bicycle companies in the Harrisburg area. However, he realized many of his customers would further benefit from a more affordable shop within walking (or biking) distance of downtown. “Ross [Willard], who owns Recycle Bicycle, had told us and kept telling us, ‘Hey, there’s these guys who are doing the same thing that you’re doing in the basement of Little Amps,’” Morrison says. In the process of purchasing the building, he contacted Andy Hollinger and Zach Spellman of this operation, and they agreed to combine forces, money and tools to create The Underground Bike Shop. The idea to open the doors for gigs stemmed from Hollinger and Spellman who pursued music themselves in addition to their bike project.

“We kind of discovered of this being an ideal location since it has off-street parking and no immediate residence above,” says Morrison. “We don’t really have noise restriction issues, we have a decent amount of parking for people,” he motions to the right side of the building, where parking is free along a mural. Not only is the location convenient, but it also lies within a part of the city known for its revitalization. Midtown is commonplace for growth and encourages new outlets for art and affordable services.

Although the shop was not purchased with the explicit intention to transform it into a venue several times a month, Morrison says he’s pretty flexible with anyone who wants to play there. “Usually if the date’s available, I say yeah.” Very few rules have been established, besides some of the bands’ events pages on Facebook that say things like “no jerks.” Problems have not occurred, but respect for the building is necessary, as Morrison takes time to clean up after every show.

“Humorously enough, without really trying we’ve kind of become, like, the DIY space in Harrisburg.” Morrison laughs. Most of the shows at the bike shop align with indie-punk and folk, but any genre is welcomed. Other guests at the bike shop include vagabond-style, one-man bands, a reggae-infused DJ and even members of the Harrisburg Symphony. “There definitely is room for anything and everything,” he adds.

Besides selling and fixing bicycles, an original goal of the shop was to allow people to hang out and be comfortable. “It’s been more difficult to do that than I thought,” Morrison says. “Like at some point to help get through the wintertime, it’d be kinda cool if we had more amenities in the sense of, like a coffee shop-esque kinda vibe.” However, the lease and current usage of the shop and its “stage” do not allow any permanent additions. “I’m concentrating on packing enough stuff into the space as possible, so, utilizing the space as best as I can. It’s kind of like playing Tetris.” he says. The bike shop employees work together to create new ways of storage, as a 20 foot shipping container and a unit a few cities away are bound to overflow as the business advances. “We outgrew the space as soon as we moved in.” Morrison adds. Bike shelves line and divide the shop, creating a narrow path between the front and the back of the building. Sometimes audiences have trouble situating themselves in the confines of the path. Larger groups overflow into the stage area and along the wall closest to the door. “What we have works,” Morrison says. “It’s not ideal, but it works for now.”

While opening a bike shop made natural sense to him, booking shows were more unfamiliar to Morrison. Hollinger and Spellman from Little Amps are not as involved in the shop as they were in the beginning so, Morrison has taken on a new responsibility in the music scene. “I didn’t have expectations for it,” he says. “and I still kind of am like that.”

The Underground Bike Shop has only been open for about a year, but has naturally evolved into spot for locals and visitors alike to hang out, buy bicycles, and see live music in a unique and comfortable setting. As the business grows, Morrison plans to dedicate more time to a Facebook page for the events, drawing in larger audiences and cultivating the shop as a social space.