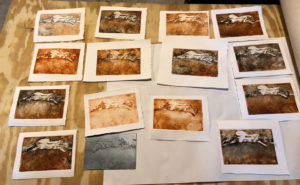 This year brings the 51st annual Artsfest to Harrisburg’s Riverfront Park. Each year, Jump Street puts careful consideration into what vendors, artists and demos will headline the event.

Shannon King, a Maine-native will be bringing his printing press to this year’s festivities, showcasing the lost art of printmaking and teaching others about his craft.

The retired art teacher, admits it’s been a long time since he attended an arts festival, but he’s really looking forward to Harrisburg’s.

He says he’s “very excited about Harrisburg.” King applied to 4 art shows and got accepted to all four. Artsfest will be his first stop, setting the tone for the ones that follow.

That’s not the only reason King is excited to be a part of Artsfest. The self-proclaimed history buff says Gettysburg is one of his favorite places he’s visited. Citing Gettysburg’s living history, King calls the battlefield and National Military Park a “connection to the past.”

Joining King at Artfest will be his family and a 500-lb. Printing press that King made himself. The Goliath machine applies 4,200 per square inch, giving King the custom precision needed to make bold strokes and lines on his plates.

“I’ve crushed some plates” he laughs. The press that King utilizes is made from turn-of-the-century farming equipment that King repurposed for the steel.

Some of King’s work is inked and then painted on top, creating a combination piece that is unique and cannot be replicated. “I like to augment some of my ideas after printing,” adds King.

Art isn’t always a stable source of income. In college, King painted oil paintings to pay his way through school. This mesh of skills has led King to broad range of mediums including welding, sculpture, printing and painting.

King is also looking forward to the camaraderie that Artsfest provides. “I’m looking forward to learning at the Artsfest,” King says. Though he doesn’t know what to expect, King confesses he “would like to be a regular participant” because of it’s sense of community. King would like to have input and feedback from the many other artists in attendance. “We [artists] want that feedback. We get so focused it’s hard to step back and see what other people think,” he explains. “When an artist asks what you think, they want your opinion “What you say will influence that artist’s work.”

He’s hoping this feedback will push him in new directions as he reinvents his art career. “I might just learn more about myself while I am there,” he says.

King hopes that his printmaking demos will enlighten and inspire others. “Everybody has a little artist in them,” King says.

Look for King’s demonstrations at the 51st Annual Artsfest May 26 -28.