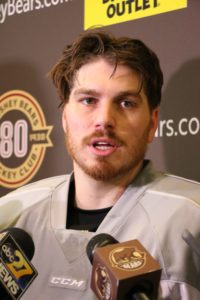 Athletes everywhere dream of competing on the world stage in the Olympics. For Hershey Bears Forward Chris Bourque, this dream was realized at the 2018 Winter Olympics in Pyeongchang, South Korea.

While the U.S. Women’s Hockey team triumphed, earning themselves their first gold medal in 20 years in a stunning win over Canada, the men’s team struggled to find its rhythm. A 3-2 loss to Slovenia in the first game set the tone for the tournament’s duration. A 4-0 shutout versus the Olympic Athletes from Russia solidified it.

In the playoff game qualifier, the men’s team suffered a devastating blow. A 3-2 shootout loss to the Czech Republic, ending their chance at earning a medal in the 2018 games.

No doubt the series of losses was a tough pill to swallow for all of the talented members of the U.S. Men’s Hockey Team, but the splendor of playing in front of the world made the bitter pill more palatable.

“It was the trip of a lifetime, for sure,” says Bourque. “It was unbelievable.”

It can be easy for a dream like playing in the Olympics to fail to live up to expectations, but Bourque says the games exceeded his. “I knew it was going to be a blast, but the goal was devastating when we lost that last one.”

Bourque says the loss was an emotional one, “I’ve never felt like that probably in my life, after losing a game. It was tough to comprehend. I haven’t been that emotional over a loss in a long time.”

Bourque says the speed of Olympic hockey was a bit of a shock. “It was very fast. Faster than any hockey I’ve seen in the NHL.”

Another take away from the Olympic setting was the camaraderie. Bourque says all of Team USA was on the sidelines supporting each other in various sports and events. “We stayed with all the other athletes in a tight-knit group – the whole American team,” says Bourque, not just the hockey team. Everyone was cheering each other on and going to each other’s events and stuff. It was so much fun.”

Win or lose, Bourque is grateful that he got to experience hockey at the Olympic level. “It went so fast, too fast to be honest,” he adds.

There wasn’t always much down in Pyeongchang, but athletes, including Bourque, took time to see South Korea and explore. “It was more than just a hockey trip, for me,” he says. “It was a chance to go over and see a different culture, see a different part of the world and just enjoy different food and a different language.”

Now that he’s back on home ice, Bourque is ready to see the Bears make a playoff push. “We’ve got 19 games to go. We’re going to have to win a good majority of them to get into the playoffs, but I think that’s there number one,” says a determined Bourque. 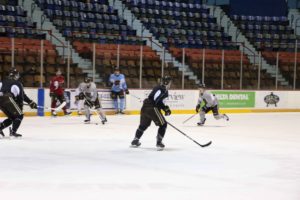