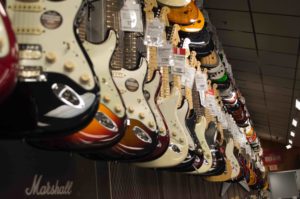 “I didn’t really think Lemoyne had a scene,” says Shayne Reed, vocalist/guitarist of Almost Honest, a metal band from New Cumberland. “We’ve played in that town a few times,” he adds, but it seems the sliver of space just beyond the bridge from Harrisburg has more potential than actual use of its atmosphere.

Dubbed as “the little town that has it all,” Lemoyne offers a starting point for amateur musicians. Instrument stores cluster the streets, music lessons are given around every corner. Tucked away lies The Champ, a stage fit for both local and touring bands.

From the fun vintage instruments at Players Exchange to quality repair and lessons at BCR Music and Sound, the businesses in Lemoyne have built the structure of the “scene.” Lemoyne’s several music stores each offer something different and serve a niche purpose. Nick Carothers, guitar instructor of West Shore Music, believes that Lemoyne is a great area to teach music in: “There are many people who are interested in studying and learning an instrument,” he explains. Carothers, for example, caters to the interests of his students and incorporates goals into the lessons. “The community then gets to hear them, so everybody has fun,” he adds.

Much of the scene’s community and the heart of music in Lemoyne lies off the beaten path– The Champ is a hidden hub for dozens of regulars and open to anyone who wants to see or play a vibrant show. The venue specializes in metal and its sub-genres, and promotes local bands to play alongside national acts. “We love playing The Champ,” Hayden Calhoun, guitarist of Lemoyne-based band If Not For Me, says. “There’s consistently a good crowd of people that comes out to the venue no matter what bands are playing,” he adds. Calhoun credits his enjoyment of the space to both the exceptional sound quality and to the inspiration he finds from other bands who perform there. “Our venue is a very welcoming, friendly and safe environment,” he continues. “Everyone knows everyone and we’ll all friends here.” Since its doors opened in 2004, The Champ has continued to pride themselves, not only on their support of local music, but also in their positive atmosphere; promoting tolerance, banning the use of drugs and alcohol and forbidding violence. This has been a constant for the past fourteen years, even as owners have switched a number of times. The Champ is currently owned by CI Records, who are based in Lancaster. While safety and comfort are concerns at this venue, musicians and their fans are still more than encouraged to make it a fun place to see a show. “[The Champ is] basically a garage with toilets that are horrifying and someone brings a pet duck with a diaper on,” Shayne Reed says affectionately. “It’s not a metal show if you don’t fear for your bowels,” he adds. As lively as this seems, though, some predict that local scenes everywhere are on their last few breaths.

“The metal-core and metal music scene is really the last rock star and touring kind of music left,” Ryan Macaluso, music producer and former owner of The Champ admits. “Music is global and just lost the local vibe now,” he adds. Macaluso claims that The Champ and venues like it have occupied death row for years because the internet has encouraged musicians to release “constant content,” instead of full-length, physical albums. “The music industry and the world just got a lot smaller, meanwhile the culture and music got a lot bigger,” he says. Macaluso insists that the downfall of local music is not a bad thing. Instead, this is just the way music has evolved in conjunction with real-life advances in technology. While bands still enjoy touring and playing shows, fans can watch their music videos online for free.

However, watching performances through screens and forming connections via comments and messages still is not completely equal to the beauty of live music. “It’s great that Lemoyne has a scene but I wish it had more variety,” Reed says. “Not a lot of venues in the area sadly. That’s why we tour,” he continues. Almost Honest has drawn in good crowds at The Champ because it’s so close to their hometown, and they always enjoy performing.

Lemoyne has created a plot of growth for bands and individuals, but the town’s scene has room to grow in itself, as well. Most bars, cafes and parks of the area haven’t evolved to align with the population’s musical interests, but display the capacity to do so. Continuation of music education and enthusiasm of the craft can push for creation of new venues and new tunes in the little town.