Eyeball to eyeball with a hawk, you are transported to a primeval world of survival, where a tiny speck moving hundreds of yards away is your next meal, and a talon can pierce a heart.

Still, humans and birds have developed a certain understanding over the centuries. We’ll catch game for you using our superior vision and speed, the birds seem to say. But disrespect our instincts at your own peril.

Falconry is a 4,000-year-old hunting craft, perfected 3,000 years before “some genius invented black powder and guns.” 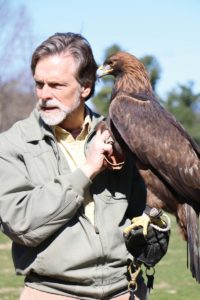 The speaker here is Jack Hubley – falconer, educator and WGAL News 8 naturalist. I met him on the sloping grounds of Hotel Hershey, when Adventure Chick participated in The Falconry Experience, Hubley’s program offering the rare opportunity to interact with birds of prey.

At its heart, falconry is hunting. Falcons and their deadly talons, lightning-fast “foot-eye coordination” (as Hubley put it), and – yes – hawk eyes were first harnessed by Central Asians around 2,000 B.C.E. for hunting meat for human consumption. Like training a dog, right?

Not quite, said Hubley. A dog is a “designer wolf” that will retrieve a duck and return it to its human for little more reward than a scratch and a “good dog.”
Try to snatch a meal from the talons of a hawk, and you’re likely to be that bird’s appetizer. So, a “diplomatic exchange” coaxes a falcon to exchange its catch, all furry and bony, for a nicely skinned and ready to eat piece of meat. The fresh catch is left unattended, but when it comes to relinquishing the fresh kill, “it’s her decision, not yours.”

“They do not share well,” said Hubley, who had the look of a natural-born naturalist, and a love of groan-worthy puns (“Ever see down when it’s up?” he asked when an eagle down-floated through the air).
Licensed falconers are rare – only 180 out of 90,000 Pennsylvania licensed hunters – because earning a falconry license requires completion of strict federal and state regulatory and training regimens, including a two-year apprenticeship.
Falconry education, with its own distinct federal permit, is even rarer. The Falconry Experience is one of only eight such programs from West Virginia to Maine.

On this day, we met a mesmerizing golden eagle with a six-foot wingspan and a head full of reddish-gold highlights. With her three-inch hind talons and front talons known as the “kill toe” on powerful feet, she is capable of “getting to any organ in my body,” Hubley said.

She also seemed to enjoy having her chest scratched by Hubley, and she calmly promotes The Falconry Experience in appearances at Hershey properties. Oh, and she rides with Hubley on a backseat perch in his pickup truck.

To our human eyes, the blue sky seemed clear of flying beings, but this golden eagle’s yellow eyes, capable of seeing two to three times farther than ours, were transfixed by something high above. Was she anxious to take flight? Not really.

“They’re masters at energy conservation,” Hubley said. “It’s a whole lot more energy efficient and much better survival insurance if you can sit and watch for quarry than if you’re chasing around looking for it, because then you’re burning calories.”
Hence, the red-tailed hawk perched on an interstate highway light post. He spots a meadow vole in the median, “and boom. He’s got lunch.”

I told Hubley about once seeing a flock of small birds over Italian Lake, ganging up on a hawk. That’s because birds of prey will feast on the young of other birds, he said. Of course, by ganging up on that hawk, those grackles or crows gave away their nesting place.

“It’s a jungle out there,” Hubley said. And yes, keep an eye on your Pomeranians, miniature dachshunds and cats when they’re outside, especially at night.

We met three Harris’ hawks, all dark beauties with contrasting russet-brown feathers and white-tipped tails. Worldwide, these are preferred falconry hawks, for their user-friendliness and sociability.

The heat-tolerant members of this trio were bred in New Mexico, Arizona and Texas. As Hubley tended to the first, we could hear tiny chirps, like sea gulls in the distance. Seems they knew what was coming – their time to shine for guests and to eat.

Hubley introduced this Harris’ hawk as Rush, as in the Skyrush roller coaster. The other two were Blazer, for Trailblazer, and Thunder, to pair with Lightning Racer. This is Hershey after all.
Above, a turkey vulture wobbled in the wind, joined soon by three others. I looked around to make sure we were all breathing. We then spied a red-tailed hawk circling our perimeter.

Keep in mind that hawks are equal-opportunity predators. Hubley was preparing hotel guest Kirby Bence, of Greenville, Pa., for his turn at falconry. Turn your left shoulder toward the bird, Hubley said. When you raise your gloved hand, that’s its signal to come. Just be sure to raise your hand forward, at a perpendicular angle, so your arm doesn’t become a landing strip straight into your face.

Hubley was also keeping a wary eye on the red-tail, and then it happened. The red-tail dove into some brush in the distance, and brash young Rush followed. I held my breath while Hubley calmly called and raised his arm. Rush hopped onto a branch and, sensing ready-to-eat food in that glove, dropped something and flew to Hubley’s arm.

Whew. But what did Rush drop? Had he wrestled a meadow vole from that red-tailed hawk? Or was it just a mouthful of grass? We’ll never know. Perhaps some summertime falconry group will see the drama play out, because that red-tail and a partner in crime kept hanging around.

Kirby was the first to try falconry today. As instructed, he turned his shoulder toward the trees where Rush perched. Hubley would pull a chopped-up piece of mouse or quail from his bag – an actual mouse head came with the joke, “Gotta get ahead in this world” – and place it in the crook between gloved thumb and forefinger.

Rush had little patience for this ritual. He kept zooming from the trees on our right to some bleachers on our left.
“Rush likes to bob around in the wind,” Hubley said.

Finally, at Hubley’s instruction, Kirby raised his arm, and Rush swooped in, all about gulping down that meaty morsel tucked in the glove.

“It goes right down the hatch,” Hubley said. “When you’re a predator, the whole object is to eat as much as you can whenever you can, because in predation, you don’t know what tomorrow brings.”
When my turn came, the heavy, well-worn leather glove went on my left hand. Left shoulder to the trees. Quail thigh in my glove (seriously, if you’re squeamish, I’d advise not looking).

“All right, Junior, got a new victim here,” Hubley told Rush, still swooping impatiently. When Rush settled on a tree branch, Hubley told me to raise my arm.
“Incoming!” he called.
Arm up, and in an instant, Rush landed on the glove and gulped the meat. These birds are much lighter than they look, only about a pound and a half, and the landing felt feather-light.

While Hubley talked to the group, I had face-time with Rush, dutifully staying where he’d landed. His feathers were shining in the sun. His eyes were darting about, presumably watching for prey.
On our second try, Rush swooped onto the glove and gulped the mouse hindquarter tucked there but missed one atom-sized speck that rolled to the side. He pecked at the glove until he got it.
“He’ll glean what he can there,” Hubley confirmed.

Time now for a group exercise. There were four of us on this breezy day, and we stood in pairs, face to face. Rush had returned to the enclosure, and now, Blazer had his turn for feeding and exercise. Blazer, said Hubley, would fly between us.
Can’t be, I thought. We’re 18 inches apart. But when Hubley signaled, Blazer glided over, swooped low and flew between us. 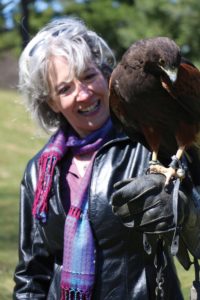 “He can really thread the needle,” said Hubley. At his instruction, we moved even closer – and this bird has a three-foot wingspan. Again, Blazer glided in low, and then he lifted higher, brushing wings against the faces of Photographer Cassie Miller and Hershey Entertainment & Resorts Communications Coordinator Dana McGlone. They barely flinched. For all their power, hawks are delicate creatures, meant to soar on the lightest of frames.

Then Hubley instructed Kirby and me to clasp hands and form a box. Blazer would now fly through this human hoop. Which he did. Once again, we barely felt a breeze or a feather on his passage through.

Which is not to say that these birds are completely graceful 24/7. When Blazer ran on the ground after Hubley, we learned the dirty secret of hawks. They run like chickens, “a very silly walk,” Hubley admitted. Good thing Blazer couldn’t recognize the sound of human laughter at his expense, or someone would have gotten a faceful of talons.