WORDS AND PHOTOGRAPHY BY CASSIE MILLE

Staring at the sky, I waited for the glow of green light that brought me to this remote part of the world where no street lights or headlights illuminate the presence of a nearby town. A chilling wind swept the exposed hair across my hood, and as I reached up to move it, a visible green cloud appeared. 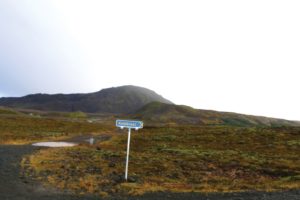 In awe, I continued to shiver, peering over Iceland’s Martian landscape at the dancing light making its way across the sky. Kneeling in the black sand, I caught the time on my phone, 11:59 p.m. – one minute until my birthday.

I decided to take the trip to Iceland this year by myself as a celebration of my 24th birthday. At 24, it felt like a good test of my own abilities to travel and problem-solve entirely for myself. I consider myself an independent person, but calling yourself independent and being independent are quite different things.

Planning everything from the flight to understanding the bus schedule, I had my hands full, but it was an endeavor I accomplished entirely by myself and an adventure that I can’t imagine not taking.

The trip didn’t happen overnight. Since July, I had been poring over a long list of flights, bus schedules and activities. Being a solo-traveler made decision-making easier – “Do I want to do this? Yes. What time? 12:30.” Done. 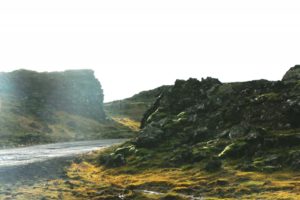 What was worrisome, if only for just a minute, was the skepticism expressed by others about my desire to travel alone. “You’re going by yourself?”

Travel is a personal experience. Regardless of destination, travel shapes your future, your perception of the world and helps you understand the past. With something so personal, it’s no wonder travelers sometimes choose to go it alone.

Fresh off the plane, I treated myself to a Skyr smoothie. Similar to yogurt, Skyr (pronounced “skeer”) has been part of Icelandic culture since the Vikings roamed the land. With that kind of smoothie, I can conquer anything.

Initially nervous about the language barrier, I quickly realized that the majority of Icelandic people speak excellent English. It doesn’t hurt to know a few Icelandic phrases, but with a language closely related to old Norse, it can be quite a challenge. 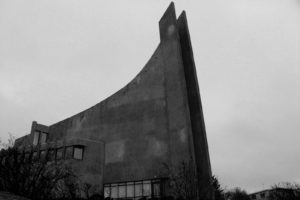 I arrived in Reykjavik about an hour after landing at 5 a.m.

Buses are the most practical way to get around the city and outlying areas. It’s also cheap, costing only 420 krona each way. That’s the equivalent of about three U.S. dollars.

To stay on budget, I roomed with a local offering a spare bedroom. There are plenty of reputable travel apps for smart phones that allow you to find cheap rooms and more personable experiences than you find in tourist-trap hotels.

My first day was mostly spent exploring the city. Using a city map, I strolled along the harbor watching the fog lift over the distant mountains.

The architecture of homes and buildings in Reykjavik is reminiscent of architecture found in Scandinavia. It’s geometric with clean, sharp lines. A great example of this style is Hallgrímskirkja, which like a guardian protrudes from the highest point of the city, watching over Reykjavik. 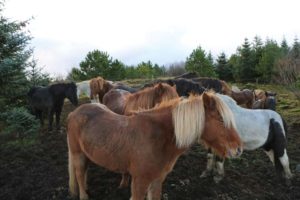 Outside of Hallgrímskirkja stands a statue of Iceland’s true-son, Leif Eriksson. Leading the charge, Eriksson seems to be looking beyond the city to the sea. Imagination takes you back 1,000 years where you can envision an armada of Viking ships nestled in Reykjavik harbor.

After my day of exploration, I took a bus out of the city to a stable just south of Reykjavik that was surrounded by lava fields. For six months out of the year, Icelandic horses are free-range creatures. Around September, they are rounded up again by their private owners for safety during the Icelandic winter. Nearly 90,000 Icelandic horses roam the country. Shorter than a normal quarter-horse (pony-sized), the Icelandic breed is easier to mount and dismount than most. Iceland is very protective of the horses, allowing no other breed to enter the country since Icelandic horses have not been exposed to the same diseases and illnesses that are common in other horse breeds.

Perched atop my horse, I looked over the area. Rocky and black with pops of green grass, the wind keeps deciduous trees and shrubs low to the ground. Making my way around a mountain ridge, my guide points to a peak, “That one, it’s a volcano,” she offers. Scary and amazing at the same time, the land of fire and ice is full of surprises. 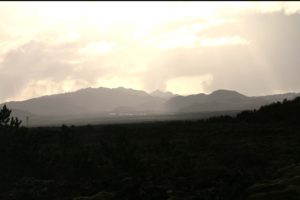 Further proof that Iceland is a world wonder lies in Thingvellir National Park. There, I stood with the Earth beneath my feet, not knowing I was standing between the tectonic plates separating North America and Europe. I felt small. Not insignificant, but for the first time reminded how marvelous our world and universe are. In the midst of daily routines, like working, washing dishes or walking the dog, you miss out on that connection to the world around you. Experiencing that alone made me feel wonderfully fulfilled.

After chasing down the Northern Lights and seeing the elusive spectacle twice on my birthday, I treated myself to a dinner in one of Reykjavik’s many seafood restaurants. A shot of BrennivÍn and a plate full of fresh mussels – simple, the way a birthday should be.

The weather had been decent – mildly cold and rainy, similar to a fall in Pennsylvania. My last day there, the weather was not so accommodating. My short walk to the bus station turned into a 20-minute battle against the wind. The rain had hardened to hail, stinging my face. Temperatures dropped from averaging in the 40s to a biting 20-something degrees. I took that as my cue to return home. 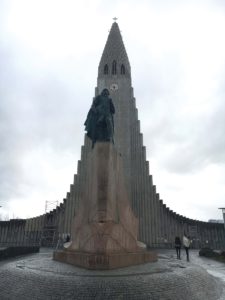 My return trip to the airport during daylight hours allowed me to gawk at views I hadn’t seen on my way to Reykjavik upon my arrival. The sky glimmered with rainbows over the rocky molten landscape. Beyond that, the harbor was gone, and only ocean was visible. Rock statues and sculptures guided us to the airport in Keflavik, where I had started my journey just five days ago.

In hindsight, I appreciated Iceland’s concern over their natural world and the animals in it. I highly recommend Reykjavik and all of Iceland to fellow solo-travelers. Iceland proved to be a safe, welcoming place for all kinds, as well as the perfect place for adventurers to embrace their inner Viking.