An Experimental Act of Giving

The act of giving is to pass along something to another person.

This action can come in many forms, such as giving time, money, food or material things. A person can give emotions, effort or support. For some, giving is the most gratifying feeling you can experience. In other cases, the act of giving comes naturally as a way of living and an expected action from themselves, intertwined in their daily routines and life choices.

Somers Compton, co-owner of the Harrisburg Improv Theatre, is one of those people who gives not because she has to, not because she wants to, but because she feels that it is what people are meant to do – help one another and give back. To Compton, giving is a way of life.

The Harrisburg Improv Theatre is located on 3rd Street in Midtown Harrisburg. It can be spotted by its colorful mural on the wall of the building. Out front stands a mailbox-style structure labeled “Free Library.” Running alongside the building’s foundation is a dirt path that anyone can venture down to get to the rear of the property where a courtyard is located.

A blue and white shed encompasses most of the space in the back. A bin labeled “donations” sits in front of the shed. Sometimes the bin is empty, and other times it is overflowing. What stands out to visitors and passersby is the hand-made sign that covers the side of the shed. It is simple poster paper and spray-painted words, but the message is powerful, thoughtful and represents a group’s experimental act of giving back to their community.

The desire to give is a trait that Compton encompasses within herself. The urge to want to help others is what she finds herself striving to do any chance she can. This particular idea for the Free Store experiment piggybacked off ideas she saw on Pinterest. She took note of what others were doing around the world and wanted to apply it to Midtown Harrisburg as she saw a need and an opportunity for it.

“There were these ideas I saw that people were building these lean-tos that were the size of phone booths,” she explains. “They built them and called them ‘give boxes.’ Some were filled with coats and clothes, some with food, even diapers for babies, and it was all free for people to take whenever they needed it, with no restrictions. It’s very popular in other countries, but it’s definitely slowly happening in America now. After we bought the theatre and even my own home, I wanted to build these things.”

While she likes to build things from scratch with her husband, personal situations made this too difficult to accomplish. Instead, Compton came up with the alternative of raising funds to purchase a shed that would serve as the shelter for the Free Store and all of the donated items.

After sharing her idea with a few friends, she made the decision to start a GoFundMe page to help raise funds for the shed.

“We raised the money very quickly,” she says. “From so many shares and people being so excited about it, we reached $1,000. Then, GoFundMe donated another $1,000 because they thought it was an awesome idea.”

The support both financially and emotionally from the community was overwhelming for Compton. While this project was something she wanted to do, she credits the outpouring of help from others as the reason for making it possible.

“I did not do this alone, and I still do not do this alone,” says Compton. “People from the theatre have come to help fold clothes and organize. People paid for this to happen and told me to make it happen. People helped me slowly figure out what we were doing, and we just put clothes out and have people take stuff and donate.” 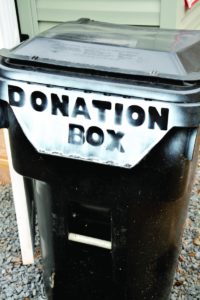 So, what can be found in the Free Store?

As Compton puts it, “Pretty much anything.”

As for the process of donating and taking things, there are no rules. There is no policing of the items, and people can come when they wish as the shed is always unlocked and open to the public.

Compton admits that there are still some kinks to be worked out, but she is nonetheless happy with how things are going so far.

“It is what it is, and it can be more,” says Compton. “But even if it stays what it is now, I’m OK with that because I’ve already had awesome experiences. It’s not perfect, but I never wait for things to be perfect before I do them. You will never do anything if you wait for that.”

Recently, Compton posted a Free Store introductory video on Facebook that quickly got dozens of shares and hit the 10,000 mark for views. In the description for the video, she imparts to viewers this message: “Feel free to hang out and organize the store and put out donations from the donations box. It is all run by us and maintained by the people who choose to do it. No one person is in charge. It is up to all to take care of the Free Store and keep it going.”

The Free Store is located behind the Harrisburg Improv Theatre at 1633 N. 3rd Street in Harrisburg. For more information about the Free Store, Compton can be reached at somers@hbgimprov.com, or visit hbgimprov.com.