A Look at Brookdale Senior Living

It’s not easy watching a loved one grow older, but that process is exacerbated when that family member has dementia. There are often misconceptions about dementia and its close relative, Alzheimer’s disease. Knowing the facts facilitates the transition into an assisted-living facility, such as Brookdale Senior Living of Harrisburg. It allows family members to still be a part of a loved one’s life, without the pressure of caregiving alone.

What are Alzheimer’s and dementia? It may be surprising to know that dementia is a syndrome, not a disease. Alzheimer’s disease falls under the umbrella term, “dementia.” While dementia impairs memory and communication skills, Alzheimer’s disease runs much deeper than that, affecting short-term memory, and can result in apathy, depression, disorientation and behavioral changes.

As the Memory Care Director at Brookdale Senior Living of Harrisburg, Shelly Dickow has her hands full. She oversees the dementia-care program, partnering with the Director of Wellness Jacquelene Cater, and specializes in services that can meet all their residents’ needs, whether they are physical or emotional. This program, called Clare Bridge, focuses on person-centered care. Dickow learns everything about the residents: their likes, dislikes, routines and who’s in their family.
“If something’s going on with a resident one day,” Dickow says, “we can refer back to that life story to look for clues that can alleviate their anxiety. They may not be able to express what they’re feeling, but we still validate [that].”
Currently, there are 24 residents in the Clare Bridge program, all treated with consistency. The Clare Bridge staff works with the same residents and provides them with the same services, such as meals, transportation and house-keeping.
“They may not know our faces,” Dickow says, “but they know us, and there’s a familiarity there that makes them feel safe.”

Brookdale’s Clare Bridge is designed around moments of success, no matter how big or small. Jessica Perry, sales manager at Brookdale, explains that every aspect of Clare Bridge is structured and routine.
“Failure is not an option,” Perry says. “If you can’t sing, you can hum.”

Clare Bridge works to engage all of a person’s senses on a daily basis. One of the main features that sets Brookdale apart from other assisted-living facilities is its use of InTouch Technology. This allows a resident to be set up with a personalized “button,” which can be loaded with activities relevant to their interests, such as slide shows, games or pictures of places they’ve visited.

“We also allow them to use Skype,” Dickow explains, “so they can still participate in family events. They could watch a granddaughter’s wedding and be there with their family.”

Along with all of these features, InTouch Technology allows for the residents to receive emails, phone calls and play music. Dickow and Perry especially enjoy the ability to play music during meals.
It’s always important in Brookdale’s Clare Bridge program that every resident is engaged and feels needed. Dickow likes to discuss current events with them. They can discuss politics and who will win the upcoming presidential election, and the resident could say Harry S. Truman. They aren’t corrected; their feelings and opinions will always matter.

The biggest challenge when working with residents who are afflicted with Alzheimer’s disease or dementia is connecting with the families. According to Dickow, there is such a stigma around these two terms, a person may be in denial of their need for assistance.

“Your journey will be different,” Dickow says, “what your mom says isn’t your mom. Don’t take it personally.” 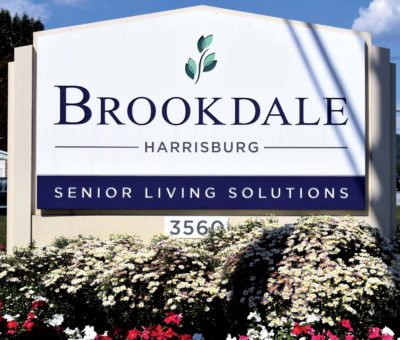 It can be very difficult for a family member to let go of the person the resident once was. There are different stages of grief; sometimes showing in anger, denial and sorrow.
“You have to let go of the person he or she was,” Dickow says, “and learn to have a relationship with the person he or she is now. Your mom may not know you’re her daughter, but you can be her sister, you can be her friend. Sometimes, that’s too hard…and we respect that.”

As of now, there is no cure for dementia and Alzheimer’s disease – only symptoms are known. Out of all the unknowns, there is one thing Dickow, Perry and scientists do know.
“Alzheimer’s disease [and dementia] sees no race, no ethnic backgrounds, no monetary status,” Dickow says. “I’ve seen it affect a neurologist and a farmer, and no two people are affected the same way.”