Did You Know? Reservoir Park

Reservoir Park is the largest municipal park in Harrisburg, taking up a portion of the Allison Hill neighborhood, and is home to a variety of attractions that include the National Civil War Museum. A part of the Capital Area Greenbelt, a 20-mile green-way that surrounds portions of the city, it is the site of outdoor festivals and performances, a number of which are performed in the band shell, another of the park’s most exemplary structures.

The park’s origins date to 1845 when an undeveloped area, then outside the city limits, called Prospect Hill was set aside by city leaders as a vantage point for viewing the state capitol and the Susquehanna River, with the Blue Mountains as a backdrop. As time passed and Prospect Hill became known as Allison Hill, city leaders realized that the highest point in the city was a great place for a city reservoir, with gravity feeding water to town now grown into a city.

The enhancement of the city’s water supply was initially built in 1872, containing one underground 30-million-gallon reservoir and two six-million-gallon above-ground reservoirs.

The park occupied a surprising 85 acres, and even to this day has resisted the encroaching city development to maintain the original amount of real estate.

By comparison, that most famous of urban parks, Central Park in New York City, encompassing 843 acres is 10 times the size of Harrisburg’s, and also steadfastly resisting the advance of development in a time of wildly escalating real-estate values. It was the vision of the Harrisburg League of Municipal Improvements and members of that organization, among them Herman Miller, J. Horace McFarland, E.J. Stackpole, Mira Lloyd Dock, Vance McCormick and W. O. Hickok III, who hired renowned landscape architect Warren Manning to design improvements and expand the park to include tennis courts, picnic pavilions, a nine-hole golf course and an observation tower. Manning, who was instrumental in creating many of Harrisburg’s green-spaces, including nearby Bellevue Park, made Reservoir Park a natural go-to place for city residents in the early 20th Century.

Perhaps the most interesting and idiosyncratic structure in the park didn’t make its appearance until mid-20th Century when the band shell made its presence known in 1933. Now known as the Levitt Performing Arts Pavilion, the open-air amphitheater was part of a singular nationwide project due wholly to the Great Depression of the 1930s and the Works Progress Administration (WPA) created by Franklin D. Roosevelt’s New Deal and the enormous funding by the federal government to stimulate the massively depressed American economy. The band shell stands as a testament to the WPA and the controversial move by the government to get the American economy moving during the Depression. It’s not clear why band shells were selected to be erected across the United States, but a total of 27 of them were constructed throughout the U.S. during the Depression, with few remaining today. They weren’t necessarily built to a specific design, but rather, represented the vision of the towns in which they were constructed. A similar WPA construction, the Roxbury Band Shell in Johnstown, was slated for demolition a decade ago to make way for a parking lot but was saved and rediscovered as a community asset by citizens of that Pennsylvania community.

The Roxbury Band Shell was dedicated, in person, by Franklin D. Roosevelt. And, like its counterpart in Harrisburg’s Reservoir Park, it epitomizes the WPA and the impact it had on America in the 1930s and 1940s. Between 1935 and 1943, the WPA employed almost eight million Americans to carry out public-works projects, with a goal of providing one paid job for every American family in which the breadwinner suffered long-term unemployment following the Great Depression. 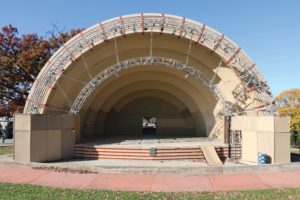 Not unlike the rapidly dwindling number of WWII veterans, there are ever-fewer Americans who can vividly recollect the deprivations suffered during the 1930s. The bread lines, soup kitchens and the Civilian Conservation Corps that employed many young men to improve national parks and public facilities are all a diminishing memory on the American landscape. And, the WPA didn’t just build band shells and clear roads, it had a component that created employment in the arts, putting to work artisans, artists, sculptors and musicians who would have been otherwise unemployed and destitute during that dark time in America’s history. An example of the arts benefitting from the WPA was the work authorized by the federal government to record the sights and sounds of American folk life. In one program, archivists and “sound recordists” were hired by the Library of Congress to document the diverse cultures of Florida, including the “underground” culture of working-class black Americans struggling with segregation and racial discrimination. An example of the WPA’s scope is evident through the work of John A. Lomax, who was assigned to serve as an advisor on folklore, collecting for both the Historical Records Survey and the Federal Writer’s Project. Lomax’s Book of Texas provided a template for the famed WPA State Guides that kept many writers employed during the Depression and created truly valuable and useful guidebooks for every state in the U.S.

Of the 27 WPA band shells, only a handful remain, making the Levitt Performing Arts Pavilion in Reservoir Park a cherished remainder of that part of a great national effort. A similar band shell, the Overton Park Shell (curiously, also renamed the Levitt Band Shell in honor of a benefactor from that city with the same surname) was constructed in 1936 by the City of Memphis, Tennessee with WPA backing and designed by architect Max Furbringer, who modeled it after similar band shells in Chicago, New York and St. Louis. The Memphis band shell has the distinction of being the site of what music historians call the first-ever rock and roll show. On July 30, 1954, a little-known singer named Elvis Presley was the opening act for headliner Slim Whitman and stole the show with his performance and launched a career as the king of rock and roll.

Harrisburg’s band shell wasn’t ever graced with a visit from “the king,” but it has recently been given an occasion for hope in the future. Reservoir Park has recently (September 2016) been given a $50,000 grant from the Commonwealth of Pennsylvania with matching funds from the City of Harrisburg to launch a study for park improvements. According to Mayor Eric Papenfuse, it has been decades since the park has been revamped. Part of the plan is to host meetings over the next 11 months to gain input for landscape architect Christine Hunter of H. Edward Black & Associates, who has been retained for the project. The park, despite the National Civil War Museum and the mansion, now known as the Honorable Eugenia Smith Family Life Center, and the Levitt Performing Arts Pavilion gracing its acreage, has suffered from maintenance issues and vandalism in recent times.

Dauphin County has any number of structures in the National Register of Historic Places, which is part of the National Park Service. It would be apropos to include Reservoir Park’s band shell, a unique example of modern history, among them.