These days, who hasn’t kayaked? Actually, that would be me. I love water. I’ve been canoeing, including that time at Gifford Pinchot State Park that devolved into a food fight with soggy animal crackers, and my sister reaching for her camera instead of offering a helping hand when I flopped into the water.

Still, I hadn’t caught up to the kayaking craze. Maybe because they’re, I don’t know, floating coffins? But not anymore. Sit-on-top kayaks have revolutionized paddling. Time for Adventure Chick to give it a try, so I called Oliphant. The owner of Susquehanna Outfitters has introduced generations to the wonders of the Susquehanna River.

“We have active beaver dams,” he told me. “We have mink that run through this parking lot. We have bald eagles and osprey. We have night herons. We have so much wildlife, it’s just beautiful.”

We were standing at Susquehanna Outfitters’ new Wormleysburg launch. Oliphant still runs some City Island operations, but this spring, he added facilities at the Harrisburg Seaplane Base (yes, there really were seaplanes here once). It’s between Duke’s Bar & Grille and Dockside Willies, with their signature mango-rum frozen concoction. 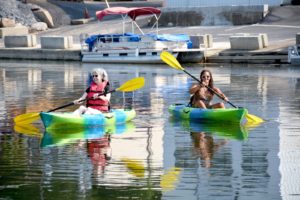 “You’re 100 feet from a Mango Bango in either direction,” he said. I’m beginning to like this sport.

Kayaking’s popularity has skyrocketed for many reasons, Oliphant said. They’re lighter than ever, so even a weakling like me can hoist one onto a car. They’re easy to maneuver and easy to drop in the water.

“Kayaks are so efficient,” he said. “You’ll feel it right away. It’s very intuitive. Most people who come here have never kayaked before. They learn it in about two minutes.”

I believed him but, knowing my klutzy ways, decided to reserve judgment. So, on this warm Wednesday evening, instructor Tara Speck and I carried kayaks to the ramp. We nudged the boats onto the river and stepped into the warm water. With all the rocks at my feet, I was glad for my water shoes. Who knew I’d ever use them for more than tubing on the Yellow Breeches? 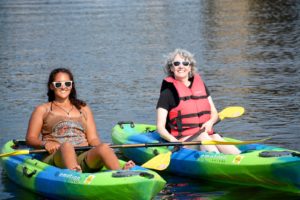 Now, Speck instructed, sit on the side of the kayak, place hands to either side and, in one motion, swing your legs in. If dunking was in my future, this was the moment. But I swung my legs without overcompensating, under-compensating or tangling feet in ropes. I was sitting in a kayak and drifting straight toward Oliphant, who was starting up his pontoon to run alongside us.

Now was a good time to learn to steer. Lucky for me, it’s ridiculously easy in a kayak. Sweep right to go left, and left to go right, Speck said. As I paddled side to side, I discovered that the shallower the stroke, the straighter the float.

“You’d be surprised at how quickly you pick it up,” Speck was saying. “You’ve already got it.”

I have? Whoa. I’d call that a miracle. Then again, sit-on-top kayaks have democratized paddling since their introduction in the 1990s. Some folks still think of cockpit kayaks as “the real kayak,” said Oliphant, “but they’re missing something, because most people are recreational kayakers. With creeks like the Swattie and Conodoguinet and Yellow Breeches all within half an hour’s drive, these little sit-on-tops are perfect for when you want to get off and splash or walk or wade or swim.”

“Or have a beer,” I suggested.

He laughed and then continued, “You just swing off and walk away. If you’re in a cockpit, you have to pull into the bank and stabilize while you get out. It’s a little bit more of a process. Same with a canoe. It’s hot and dry. It’s like a floating patio.”

Ah, but the sit-on-top kayak – cool, breezy. If a little water splashes in, it drains out through scupper holes (get me, using nautical terms). And if it flips, “You just hop back on. It’s not pretty to get back on, but it’s easy.”

Back on the water, Speck was an excellent teacher. 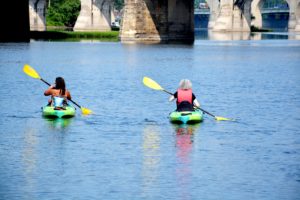 “Kayaking is very relaxed,” she said. “You don’t need to be using your arms much. And you can get a really good workout by keeping your core tight. All you’re doing is moving from the core.”

I immediately tightened my core to feel the burn. Then I immediately forgot, making the rest of the paddle a lazy sojourn. Let’s turn, she said. I swept left, and we glided right, like swans between the looming, delinked stone piers of the Walnut Street Bridge. Ahead, traffic was flowing over the Market Street Bridge, but it seemed so distant, so disconnected from this placid idyll. I broke into a sing-song voice.

Was there any danger of getting too near the Dock Street Dam? Not from here, Speck said. That perilous spot was three bridges away.

A pontoon passed on the left. The couple aboard waved, and we waved back. Yeah, I’m waving like a real river person to other real river people.

“Everyone is really respectful, no matter what kind of boat they’re in,” Speck said.

When am I likeliest to get dunked?

Speck told me she took a dip just that day, hopping out of the kayak to snag some floating trash. The reseating got awkward. To her dismay, her favorite sun dress floated away.

“It tipped over a little bit, and the dress went,” she said. “Mostly, getting back in is the time when you’re going to tip the kayak.”

And what’s the difference between river and creek kayaking? On the creek, watch for low-hanging tree limbs, Speck said. “And there’s always spiders that love to hang off the tree limbs, and someone runs into them. Happens all the time.”

Yeah. About spiders. Adventure Chick still hates them. No spiders here, thank you. Time to head back to shore.

Then came the second miracle of the day.

As he docked the pontoon, Oliphant spotted something floating past. Speck’s dress, maybe? She waded back in and plucked something from the water.

“Oh, my gosh!” she exulted, holding up her dress. “Are you kidding me? Thank you, Steve!”

Oliphant, who sometimes pontoons out to pluck boaters from the brink of the Dock Street Dam, called it “a successful rescue.” Seems the river takes away, and the river gives back.

So, what did I think about kayaking?

Loved it, I said. I could get used to this.

“The popularity of kayaking is just a testament to the boat,” said Oliphant. “It’s such an efficient, easy-to-paddle, easy-to-learn thing to do. And we have the beautiful river full of wildlife.”

Agreed. I didn’t see a mink or heron or eagle today, but then again, nature rarely makes scheduled appearances. There was, however, a Mango Bango in my future. I could get used to that, too.