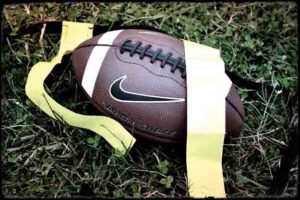 Upon the William Penn High School football field, on a Sunday morning in mid-October, white spray-painted lines mark the boundaries of battle. Every 20 of the total 80 yards, small orange cones sprout up to indicate the progress toward field supremacy.

Sixteen warriors divided in half by the allegiance proudly displayed across their T-shirt-covered chests vie for glory. Their wills are tested as they clash over the fate of a single oval-shaped ball. One side will feast upon victory, the other must swallow defeat. And, somehow, a mere two souls armed only with whistles and yellow flags govern this inferno of competition.

So maybe the first paragraph is a bit of an exaggeration, and maybe there are a few more smiles, handshakes, and friendships born than there are fierce grid-iron conflicts in an epic struggle for athletic dominance. But take my word for it, this time, that the competitive spirit is alive and well in this league, where physical tackles have been traded in for flag-adorned belts. 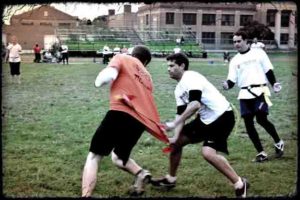 Members of the team “The Program” were kind enough to allow me to experience it firsthand. They even let me join them on the “field of battle” for an entire possession series, in which I successfully managed not to ruin their march toward the end zone for a touchdown. The following botched two-point conversion, however, on which quarterback Bill Sutton called my number was probably my fault.

Despite my presence, The Program still won the game against The Nanooks, 28 to 26.

Based on the fun I had while there for just one game, I can see why some 400 men and women, across 12 teams, come out to play in the HYP flag football league every Sunday from mid-September through the playoffs in November.

Aside from snagging flags from a player’s belt in lieu of tackling, the rules for HYP’s flag football league do differ from standard pigskin regulations. 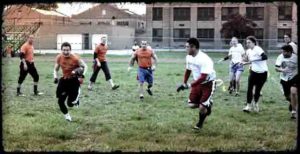 Of the eight players on each side, five are male and three must be female.

The field of play is smaller at 80 yards, and teams must travel one-fourth of that for a first down. Of the eight players on each side, five are male and three must be female. Every player, including the center, is an eligible receiver, although a female player must be the quarterback every other down.

The defense can only blitz once every four downs or after a three-second count. After scoring a touchdown, which is worth six points, the team can try for two points from the 10-yard line or one point from the five-yard line. There are no kickoffs, rather new possessions starting at the team’s own 20-yard line.

A single game is comprised of two 20-minute halves. 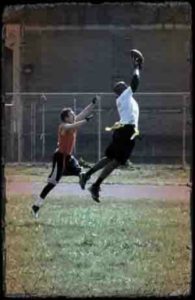 Sutton, The Program’s QB as well as HYP’s vice president of their board of directors, describes the game. “It’s pretty fast-paced and physical, especially with the rush,” says the 31-year-old. “It’s definitely different playing firsthand than watching football on TV. There’s a lot of movement going on, with very quick windows where you can catch the ball or run. People come up on you pretty quickly. Given it’s just flag football, it can still get pretty physical. There is blocking, so you have to be aware of where you’re at. I’ve seen some ladies get hit a couple of times, which is scary. There can be injuries, but overall we try to keep people from running into each other.”

The Program is one of the better teams in the league. After witnessing their talent firsthand, it is easy to see why they won the league championship their first season, and then made it back the next. The team’s overall athleticism is not the only factor in their success; there’s also a closeness among the players.

“Our team is comprised of a lot of former athletes who love to come out here and compete on a Sunday,” says Sutton. “There’s also a lot of husband-and-wife couples. We have a great time before and after the game. We’re all friends, so we really enjoy it. We practice together, and a lot of us work together on the HYP board. So this is a nice way to get away and get some stress relief.”

There’s a lot of movement going on, with very quick windows where you can catch the ball or run. People come up on you pretty quickly. Given it’s just flag football, it can still get pretty physical.

Sutton adds, “We have lawyers, bankers, engineers – you name it, we have it on the team. It’s a very diverse group, and we all have a lot of fun. It’s something that pulls us together. …We also have friends who come out and tailgate, and they have a bullhorn to cheer us on.”

In addition to being both an HYP board member and the co-chair for HYP’s outreach group, Casey Zellers, 26, is one of The Program’s female offensive players. By playing soccer as a youth all the way through college, she developed a love for competition, which she is able to indulge through flag football. “As a girl, it’s always interesting because, while it is flag football, it’s not always contact-free,” she says. “Sometimes you are taking a tackle. Especially with the athletic people we have out here, sometimes it can become no holds barred. We give it our all, and it’s great because we can do it with our friends.”

TyFlag football is not the only sport HYP offers the Harrisburg community. There’s also dodgeball, kickball, volleyball, bowling, ultimate Frisbee and tennis. “HYP has tons of sports,” notes Sutton. “We run a sport all year round. We also have junior sports leagues where we mentor kids from Harrisburg neighborhoods. We definitely encourage people to come out, either mentoring kids or getting active with one of our sports leagues. We’ve found that with active young professionals, our programs encourage them to stay in the area. It builds friendships, and many people have met their spouses through this kind of thing. More importantly, though, it introduces people to our larger mission, which is improving the city. We have over 2,000 people in the area play in our sports leagues.”